Robert Pattinson, 25, and his Twilight leading lady Kristen Stewart, 22, touched down in Vancouver, Canada for reshoots for The Twilight Saga: Breaking Dawn- Part. 2. Per usual, the on and off screen couple arrived separately, and were both rocking their grunge styles.

He sported a baseball hat, hoodie and sunglasses in order to shield himself from photographers.

Dawn director Bill Condon confirmed the reshoots for the last film in the Twilight franchise on his website earlier this month. Bill assures that there will be no dialogue in the shots, but that the two will “pop in those gold contacts one last time.” 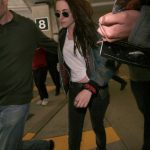 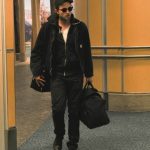 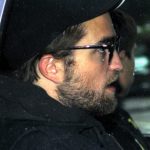 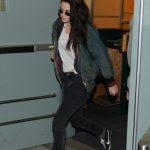 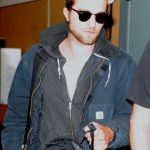 Greetings from Los Angeles, where we’re hard at work on BREAKING DAWN, PART TWO. It’s truly crazy to think that it’s been a year since we wrapped production in Vancouver, since for those of us in the editing room the work has never stopped.

A film is a lot like a puzzle, with each piece – each shot, no matter how brief – needing to fit exactly with the ones around it. Our Part Two puzzle is finally coming into full view, and in a few weeks we’ll be heading back north to pick up some additional shots – the last tiny missing pieces. We’re not shooting any new scenes or dialogue, just some technical work with some of our cast and stunt actors.

I am really looking forward to being back on set with some of the friends I’ve made on my Twilight journey, like the great Guillermo Navarro, our cinematographer, and his crew. And yes, Rob and Kristen will be there too, to pop in those gold contacts one last time…

I’m excited to report that before too long we’ll have another trailer for you to decode. And wait until you see the first posters — they’re unlike any “Twilight” images you’ve seen before. And then November 16th will be upon us and the final film will be yours!

Until then, have a very happy spring, and I’ll check back in with you soon.

Are you excited for the final Twilight film, or have you moved on to The Hunger Games? Let us know, below.