THE CAR: PEOPLES FASCINATION WITH THE MACHINE: CAR CULTURE IN AMERICA IN 1950’S [PART 6]

This post-war boom in automobile ownership and its ensuing automobile-based culture was not solely the result of the craving of Americans/Canadians of both sexes to get behind the wheel. The federal government was anxious to ensure prosperity and security and assisted the consumer boom either directly or indirectly.Automobiles then became American’s main mode of mobility. This automobile revolution was also aided by the federal government highway building program. 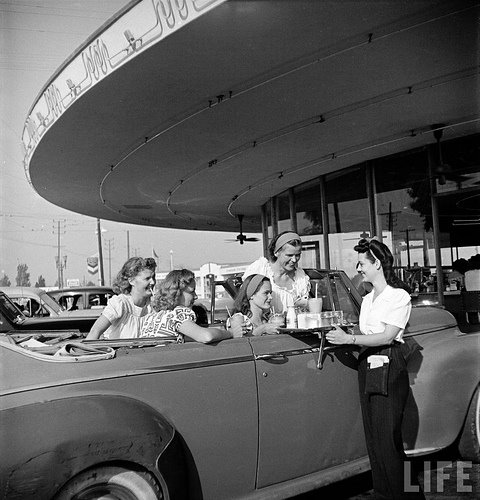 Teenagers were publicly recognized as a growing phenomenon in the 1950s and 1960s. The offspring of the parents who had married young during the war or immediately thereafter, these “baby boomers” forged their own lifestyle, a proportion of which was centred on access to the car that could give them freedom. Having wheels meant escape from prying eyes, gaining “street cred[ibility]” among high-school or college peers, and access to the local auto-mobile culture. Gaining a driver’s licence was, the most important rite of passage in the high-school experience. While the majority of teenagers who inherited and customized “hand-me-down jalopies” were young males, young females were by no means debarred from teenage automobility. Indeed, they were central to this style of youth culture. Part of teenage driving was to impress other male students about knowledge of and intimacy with car technology, but another part was to be seen cruising with a popular girl, often enjoying the new rock and roll music to the annoyance of the older generation. To join the scene teenagers also frequented the local drive-in restaurant or visited the Drive in Theaters .By 1950 there were 1,700 outdoor drive-in movie theatres, a number that grew to 4,200 only four years later. Reaching their height of popularity in the late 1950s and known as “passion pits” by both their critics and admirers, they offered teenagers, more so than families, a haven where they could be themselves while watching road movies or movies with automobile themes at bargain-basement prices, if not indulging in other activities.

During the years of confidence in the twenty to twenty-five years after World War II, the automobile moved to center stage in American/ Canadian life. For both sexes of all ages, it became a household vehicle, if not technology that changed their way of life. It was the house on wheels. Girls and women viewed the car and its culture in differing ways from boys and men, but everyone wanted access, increasingly as drivers as well as passengers. Even though the years of liberalism in the 1960s also provided a sharp critique of the hypothetical benefits bestowed by automobility, car production and sales continued to rise as Americans became more dependent on their personal vehicles and public transit systems offered few alternatives to the increasing number of people living in suburbs. There was a growing awareness of the environmental, energy, and safety problems created by high levels of driving, but remarkably little action was taken as all Americans aged 16 and over (and sometimes younger) took to the road to pursue their individual desires and commitments.