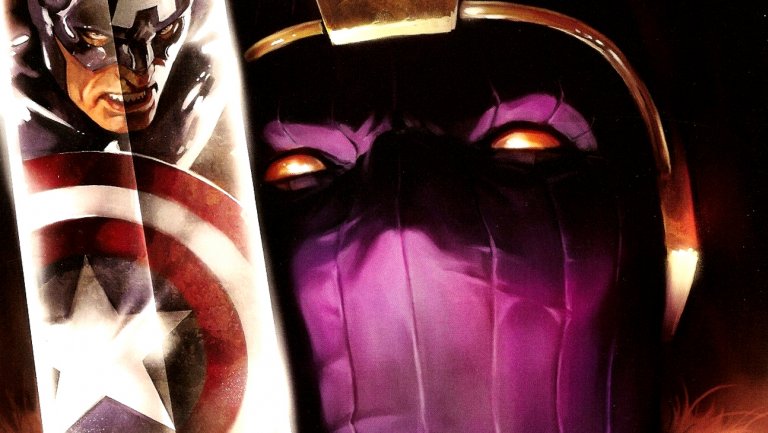 You can’t keep a good Nazi down, even if you can keep him out of the trailers.

One thing almost entirely absent from the promotion for Captain America: Civil War is Baron Zemo, the theoretical villain of the piece as played by Daniel Brühl — well, the villain that isn’t Captain America/Iron Man (delete as applicable), at least. It’s a shame; with a comic book history that places him in the middle of Captain America and Avengers mythology, Zemo is a villain that deserves far more attention than he’s been given so far.

Baron Heinrich Zemo debuted in 1964’s Avengers No. 4, in a flashback sequence that identified him as the Nazi responsible for the explosion that killed Bucky — or so it was believed at the time, prior to the latter character’s revival as the Winter Soldier, four decades later — and put Captain America into ice.

It was an introduction that identified him as Cap’s arch nemesis, a role he would proudly claim when he showed in two issues later to cause trouble for Cap and his fellow heroes in the modern day with the aid of his Masters of Evil. (Not to be confused with the X-Men’s Brotherhood of Evil Mutants or Doom Patrol’sBrotherhood of Evil, of course.)

His criminal career didn’t last too long, however; Zemo was killed in 1965’s Avengers No. 15 when he accidentally started an avalanche that buried him. His final words, fittingly, were “Stay back — back — !Agghhhhh…!” Ever the philosopher, Captain America eulogized his foe by saying, “No man can perpetrate evil without paying the price! If fate could speak, it would say… ‘By my hand, shall always die — a villain!'”

Heinrich Zemo might have died, however, but Baron Zemo was far from done — although it would take some time for him to return. Initially, the second Baron took the costumed guise of a villain called the Phoenix, showing up in 1973’s Captain America No. 168 to reveal himself as Helmut Zemo, the son of original Baron who blames Cap for his father’s single-mindedness and subsequent death.

Presumed dead after falling into a vat of “Adhesive X,” he would reappear in 1982’s Captain America No. 275, claiming the title (and costumed identity) of his father and launching the first of many schemes intended to destroy Captain America and avenge his family’s honor.

One of the second Zemo’s defining traits is that he almost never worked alone; he allied himself with the daughter of the Red Skull and her so-called Sisters of Sin, he formed a new Masters of Evil — a group with which he managed to actually defeat the Avengers — and even married a woman who claimed to be the reincarnation of his own dead father.

Perhaps his most successful partnership, however, was with the Thunderbolts, a team of villains pretending to be superheroes as part of a particularly perverse long con. In the end, however, the con was on them; many of the team ended up reforming for real, including (for a short period of time), Zemo himself.

Zemo’s reformation lasted about as long as the multiple “deaths” he’s suffered during his career, however (In addition to his original Adhesive X bath, he has also been murdered by a vigilante, blown to bits by a teammate and thrown into the timestream by a separate teammate; he’s shown an impressive ability to return each time). In recent years, he has reappeared in a number of villainous guises: as the head of a new line-up of the Masters of Evil, as the leader of the HYDRA terrorist organization and, most recently, leading a supervillain uprising in a SHIELD-sponsored prison called Pleasant Hill, in the Avengers: Standoff! storyline that concluded this week; at the end of that storyline, he is transported, against his will, to the Himalayan Mountains where he is seen planning “the most wonderful things… the most wonderful, terrible things…”

For the purposes of Captain America: Civil War, however, it’s a 2010 comic book storyline (“No Escape,” Captain America Nos. 606-610) that might prove the most interesting reading, with Zemo upset at the return of Bucky to action and embarking on a plan that would reveal to the world just what the onetime hero had done while under the Cold War control of the U.S.S.R. as the Winter Soldier.

Could this be the movie Zemo’s aim, setting up the conflict that turns Captain America and allies against Iron Man? All will be revealed shortly; Captain America: Civil War opens May 6.