‘The Dark Tower’ Gets A Trailer 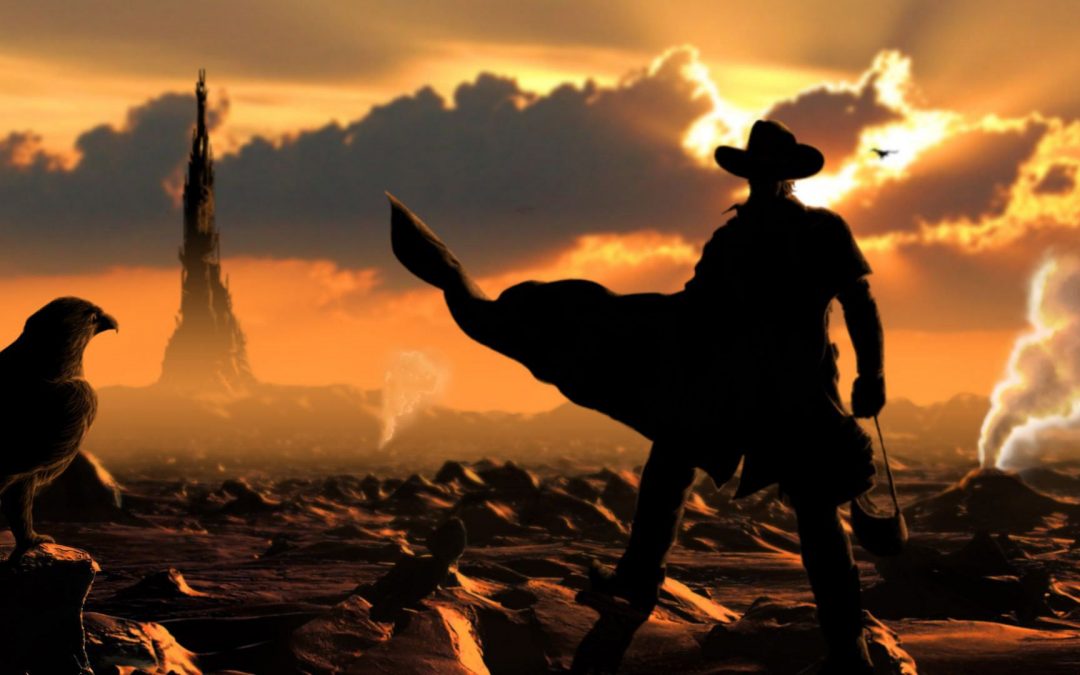 “THE MAN IN black fled across the desert, and the gunslinger followed.”

This is Stephen King’s best opening line. It’s one of the best opening lines in literature. However, it is not the opening line in the trailer for The Dark Tower that dropped this morning. That trailer instead opens with Idris Elba slinging guns, cuts to a shadowy Matthew McConaughey, then to New York, then back to Idris. This, Constant Viewer, is not the movie version of a Stephen King series—such a thing could open in no other way but with the man in black fleeing across the desert—but a very self-conscious adaptation, and you and I (and other fans) are going to have to learn to live with that. Reluctantly.

If you have not read the eight-book, 1.3 million-word series that forms the basis for The Dark Tower, then here is a short version of the plot: In an entropic world full of killer lobsters and magic and almost-remembered technology, a gunslinger named Roland Deschain (Elba) is on a difficult journey to a dark tower to save the world. The long version is, well, longer: It involves not only Deschain following a bad guy called The Man in Black (aka The Walkin’ Dude, aka Randall Flagg) across the desert, a psychic boy named Jake Chambers (Tom Taylor), a woman in a wheelchair with dissociative identity disorder named Odetta/Detta who has tactical sex with a demon and uses the sieve of Eratosthenes to find prime numbers, a heroin addict named Eddie who fights a gun battle naked and defeats an insane train named Blaine with dad jokes. There’s also a place in New York called the Dixie Pig where cannibal vampire things eat people, and a place in Mid-World called Calla Bryn Sturgis that’s patrolled by robot wolves. And Oy, a smart, lovable, loyal, toddler-version-of-a-talking-animal who looks like a slinky raccoon and whose eyes are rimmed with gold and if you have read the entire series and your throat doesn’t lump up at the story of Oy, then you might as well just make a reservation at the Dixie Pig and let them eat your heart because you aren’t using it anyway.

Basically, we’re talking about a lot of nested tales and back-storied characters, and some exuberant world-building that combines Old West and Middle-Ages themes with some Lord of the Rings-ish stuff, and some ley line business and a trip to see the Wizard of Oz. The inspiration for the series is actually Robert Browning’s “Childe Roland to the Dark Tower Came” which prefigures T.S. Eliot’s “The Wasteland,” which is (almost) the title of one of the books, so there’s plenty of literary fan-fiction and high-fiving for the high-minded.

The series also spills into our own personal but fictional world (or some version thereof) then—curiouser and curiouser!—there are also doorways into actual real-world events that happened to the author of the made-up world in question who then inserts himself into the fantasy narrative of the book he is writing, which, by the way, also tendrils out into other worlds HE has built (as he is famous for doing) like The Stand and ‘Salem’s Lot. (I see you there, Pennywise, at moment 1:30 in the trailer.) Which is to say, it’s a complicated series. One without what you’d call a Hollywood ending.

So you can’t really expect the movie adaptation to capture it all. Some wise parts of the internet have made their peacewith that—and, maybe to its credit, the movie doesn’t try. It seems instead to promise a more Manichean struggle between good and evil, one punctuated with a trip to the Dixie Pig and some humor wrung from Roland’s first encounter with our world. (Maybe we might get a little tooter-fish sandwich action going, too?)

Roland Deschain: Do they have guns? And bullets in your world?
Jake Chambers: You’re going to like Earth. A lot.

Speaking of guns, the bullet juggling in the trailer is fantastic—the mid-air drop-swipe! the belt riffle! The Lifesaver, where you flick them out of your palm with your thumb!—and I’d watch the movie just for lizard-brain-stirring gun lore: “I do not aim with my hand … I aim with my eye. I do not shoot with my hand… I shoot with my mind. I do not kill with my gun … I kill with my heart.” But what the movie does not promise is the band-of-brothers ka-tet that (to me) made the books so interesting. No Eddie Dean. No Detta+Odetta = Susannah. Crucially, no sign of the beloved Oy.

You can’t really expect the movie adaptation to capture it all. Some wise parts of the internet have made their peace with that—and, maybe to its credit, the movie doesn’t try.

I mean, I get it. Adaptations have to be different than the original material, and that alone doesn’t make them bad. I thought Arrival was more perfect on paper, but the movie was still fun, and Peter Jackson’s Lord of the Rings adaptation was genius. (My family is listening to The Fellowship of the Ring on Audible right now and let me just say that we are closing in on hour 10 and I am getting awful tired of Tom Bombadil.)

When a world is this huge and multi-dimensional, there’s no hope of cramming it into a 2-hour movie. But I fear the spirit of the books may be lost. One of my favorite parts of the series is when the ka-tet gets captured by Blaine the bonkers AI-gone-AWOL train, which then forces them into a riddle contest (shades of Gollum and Bilbo in the passageway under the mountain). Roland and Jake know plenty of good riddles, but it’s Eddie who defeats Blaine by letting his mind rest and sprawl and free-associate gnostically, linking different parts of his brain together—not looking straight at the problem, not focusing on the direct combat with the loco-motive, but rather going soft and thinking around corners to arrive upon the sorts of jokes that might perplex a computer.

Eddie adapts the Gunslinger’s creed to his purposes: “Because I shoot with my mind,” he thinks in the book. “My mind. God help me to shoot this overblown calculator with my mind. Help me shoot it from around the corner.” I’ve always loved that scene because it’s a way of thinking that can get you out of a rut—it could get a lot of us out of some of the ruts we’re in, actually, if only people would do it more.

I’m willing to use the books as a reference point to watch the movie, just as King used Childe Roland as a reference point to write his series. I mean, he created a multiverse that suggests worlds upon worlds overlapping, intersecting, kissing up against each other and tearing themselves apart. Why shouldn’t whatever is in the movie be canonical enough to stand up to scrutiny? But the sorts of binary struggles promised in the trailer aren’t really what our particular world needs right now, and they’re not the Kingish themes that stand up well on screen. Some of the most successful adaptations of his books are the movies based on two stories in Different Seasons, the novellas that became Stand By Me and Shawshank. Those books and films are about relationships between people, personal journeys, and thinking yourself around a corner, through the wall, and straight out of prison. Apocalyptic shoot-outs between cowboy knights and creepy monster-things are fun enough to watch, but there are other worlds than these—and we need to find them.