The Changing View Of Police In Films And TV 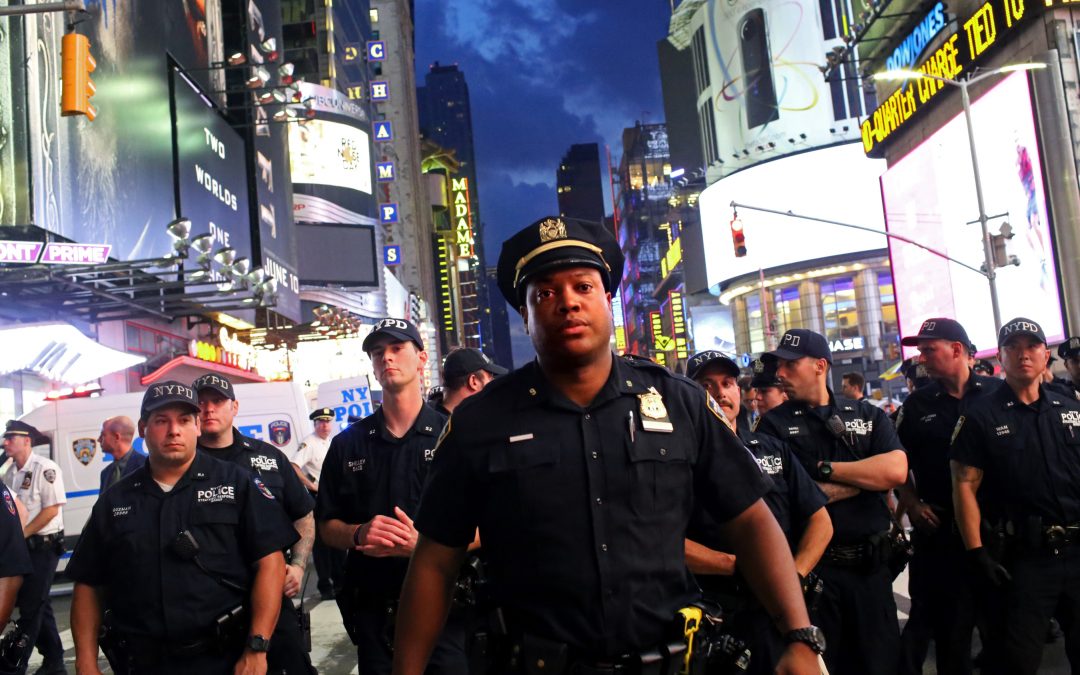 Even for a journalist like Wesley Lowery, who’s chronicled the real-life killings and raw trauma that police shootings across America have left in their wake, the unyielding depiction in Kathryn Bigelow’s new film “Detroit” of the terror inflicted by three white officers on victims at the Algiers Motel in 1967 was deeply unsettling.

The young black reporter from The Washington Post was only 24 in 2014 when 18-year-old Michael Brown was shot and killed by a white police officer in Ferguson, Mo., a seminal event that would bring to the fore the debate over race and policing. What most stood out to Lowery in “Detroit” was a rare depiction of police in film: a clear-cut portrayal of racist white officers who violently violated the civil rights of the black Detroit residents.

Bigelow’s movie, which debuts wide in theaters Aug. 4, centers on the race riots of 1967 and the police raid at the Algiers Motel, where three black men were killed and nine other people, including two white women, were brutally beaten by the cops.

“Detroit” exposes viewers to the perception that many in black communities have of the officers they’ve interacted with, says Lowery, who conceived a series at the Post that produced a database of police shootings across the country in 2015 and articles analyzing the trends, which won the newspaper a Pulitzer Prize last year for national reporting.

“Not that every officer is this kind of caricatured bad cop,” Lowery says, “but the reality is that people like that exist … There are officers out there violating people’s civil rights, doing some horrific things. Having a full airing of that [in the film] was very powerful. I was unprepared for how jarring some of that would be.”

For decades, the stories told by Hollywood filmmakers and producers of police and crime dramas have presented largely favorable depictions of the men and women in blue. Storytellers have prided themselves on the cooperation they get from police departments, federal law enforcement agencies and retired officers, often enlisting them as technical consultants to depict the most accurate portrayal of police work possible — with mixed results. But the increasing visibility of criminal justice groups led by young and vocal activists has started to demand a much more complex look at how the system is portrayed.

It’s a shift that many activists say is long overdue, in a film and TV landscape still dominated by procedural dramas that, gritty as they are, often focus on the case and its resolution — and not the deeper, more complicated issues of race and a more nuanced consideration of proper police use of force.

Upcoming film and TV projects have undoubtedly been influenced by recent events in Ferguson, New York, Louisiana and elsewhere, putting pressure on writers to reflect the experience of many black Americans and their interactions with police. Since 2009, more than a dozen police departments across the country — Cleveland, New Orleans and Ferguson among them — have operated under consent decrees after U.S. Dept. of Justice investigators found patterns of civil rights violations. Distrust of police has run high among black communities and is as prevalent today as it was in the 1960s, some say.

The show is unusual not just in the nuanced way it looks at policing and racial profiling but in who producers and creators turned to in making the series: Color of Change, the advocacy organization that has made issues of racial justice a priority.

“Pop culture has a significant impact on the lens through which people view the relationship between police and communities of color, and of criminal justice more broadly,” says Valerie Jarrett, senior adviser to former President Barack Obama. “They humanize stories in a way that doesn’t come across in the 24-hour news cycle. They bring people closer to issues they may not experience in their own life — and that’s where the empathy begins.”

Jarrett believes there must be empathy before there can be change. “The humanization of criminal justice is essential to reform a broken system,” she explains.

She says that pop culture is evolving. Just as the news media has woken up to the problems of police shootings, thanks largely to the proliferation of smartphone and dashboard cameras, so too have content creators become cognizant of the realities of the justice system.

NBC’s “Chicago” franchise has come up against criticism for the way it treated a sensitive topic. Earlier this year, Chicago Tribune columnist Nina Metz wrote that while the show “Chicago P.D.” did delve into issues of racial profiling, it did so in a way that put the police depicted in a positive light. The scripted drama was a contrast to a scathing, real-life Dept. of Justice report on the Chicago police that showed a systemic pattern of poor training and abuses.

“How are we, as TV viewers, meant to reconcile what we see on the show with what the DOJ has spelled out in its report? Does it make you uncomfortable?” Metz wrote. “That the show functions as de facto marketing for the CPD? That the network and everyone involved with the show is making big money from it? And even if it does bother you, what then? I don’t necessarily think the show should be yanked off the air or radically revamped. Almost all cop shows are guilty of these fictions. Still, I’m struggling. Something doesn’t sit right.”

Dick Wolf, a creator of the “Chicago” franchise, could not be reached for comment.

John Langley, creator of the reality series “Cops,” says that policing has to be put into perspective. As the show comes up on its 1,000th episode, his experience is that “the vast majority of officers are decent, hardworking human beings trying to do a good job.” He says he’s not trying to excuse any bad or illicit behavior but warns of a rush to judgment.

“It’s also complicated,” he says. “It’s easy to judge when you’re seeing one video clip. You see a picture but not necessarily the big picture.”

Langley says that in the decades his show has been on the air, policing has become more transparent, noting that among other things, police officers now wear body cameras. He says that one of the primary achievements of “Cops” has been to “humanize police officers, so you don’t just witness a uniform.”

“People say, ‘Of course you are showing their point of view,’ and I say, ‘Of course we are, because we are riding along with them,’” Langley adds. “But the best episode of ‘Cops’ is the one with the fewest edits.”

During the 1960s, police dramas meant “Dragnet” and “The FBI” — shows that were largely divorced from the reality of what was taking place on the street as the decade spilled into turbulence. In the 1980s, “Hill Street Blues” was groundbreaking in that it ventured into the personal lives of the police force, not the neatly solved detective whodunits that had dominated the landscape.

But it didn’t lead to a flurry of cop shows that presented officers as much less than heroic, and few programs delved into issues of racial profiling.

“Contemporary pop culture always portrays police officers as completely sure of what they’re doing when they fire their gun,” says Alyssa Rosenberg, an
opinion writer at The Washington Post, who last year set out to put together a historical account of police representations in pop culture. Her work resulted in an 18,000-word series that delved into how police narratives were told in film and television.

In shootings depicted on-screen, Rosenberg says police officers are not emotional. “They’re not afraid. Because fear is never part of the equation, that makes the police look very good,” she says. Such fearlessness “makes them look like action heroes,” she explains. “But because it’s not the reality, it sets up unrealistic expectations, both for citizens and police officers.”

Joseph Wambaugh, a former LAPD detective sergeant who later began writing fiction and nonfiction books depicting police work, is no stranger to Hollywood. His works have been adapted for film and TV, beginning with “The New Centurions” in 1972, which starred George C. Scott. (A promotional poster for the film exclaimed: “The nationwide bestseller about cops — by a cop!”)

In general, media depictions are so inaccurate, they’re laughable, Wambaugh says. But he agrees with Rosenberg about the fear factor: “What’s not depicted remotely correctly in films when it comes to cops and shootings and all that, is how to deal with fear. Nobody makes cop movies, it seems to me, that have the least understanding of fear.”

Tom Fontana, whose 1990s series “Homicide: Life on the Street” was innovative in its focus on characters rather than cases, says that the “good-bad thing about episodic television is that it is incredibly cyclical. What happens is that shows like ‘NYPD Blue’ and ‘Homicide’ and the original ‘Law & Order’ are hot; then those go away and then we have shows like ‘CSI,’” he says. “[Viewers] want the comfort food of seeing every bad guy going away, and knowing that when they go out on the street tomorrow they’re not going to be in danger. They want their wish fulfilled.”

When “Homicide” debuted, Fontana says, the network was at first ecstatic. “Initially they were so thrilled to have Barry Levinson doing his first television show. They gave us a lot of leeway. I think they very soon came to regret that.”

Fontana says that a few weeks into the first season, he got a call from a network executive who told him, “Every week is so dark and depressing, and there are all these young black men being killed. Aren’t there any other murders going on in Baltimore?”

Fontana says the series wanted to make the point that a young black man in Baltimore was more likely to be killed in a shooting “than an American soldier was at Normandy.”

“There was a lot of pushback because we were trying to tell the truth, and I think the network started to get nervous.” While that doesn’t mean executives wanted the show to be light and happy, “they didn’t want it to be as unsettling as it was,” he explains.

“We didn’t always close the case, which bothered them,” he notes. “We wanted to view the world we were depicting.”

Michael Skolnik, a producer and activist who’s on the board of the Trayvon Martin Foundation, believes that movies and TV shows are going through an evolution in how they depict police. “You can no longer ignore the reality that America has a policing crisis,” he says.

The reason that evolution has taken so long, says Skolnik, is related to what the audience has craved. It’s not just police procedurals but reality shows like “Cops.” And, referring to the A&E show “Live PD,” he adds: “On a Saturday night, you can sit in your house and watch people pull people over in real time. That’s weird.”

The differences between the heroic depictions of police and the more nuanced portrayals have been most pronounced on platforms outside broadcast TV, like
Netflix and HBO, as well as in features from directors like Barry Jenkins and Michael B. Jordan.

“Detroit” also stands out for the way it presents the story of an incident that was never pieced together at the time by the news media, says The Washington
Post’s Lowery. After examining news coverage of the incident and trial, the reporter suggests it posed a challenge for the modern-day retelling.

“This was a case where a full comprehensive narrative of what exactly happened never surfaced in the trial,” Lowery says. “The police never were fully forthcoming or never had to fully explain what happened. They could just say, ‘No, we didn’t do that.’ ” For a director like Bigelow, he says, “that creates a risk: You have to choose to believe the victims.”