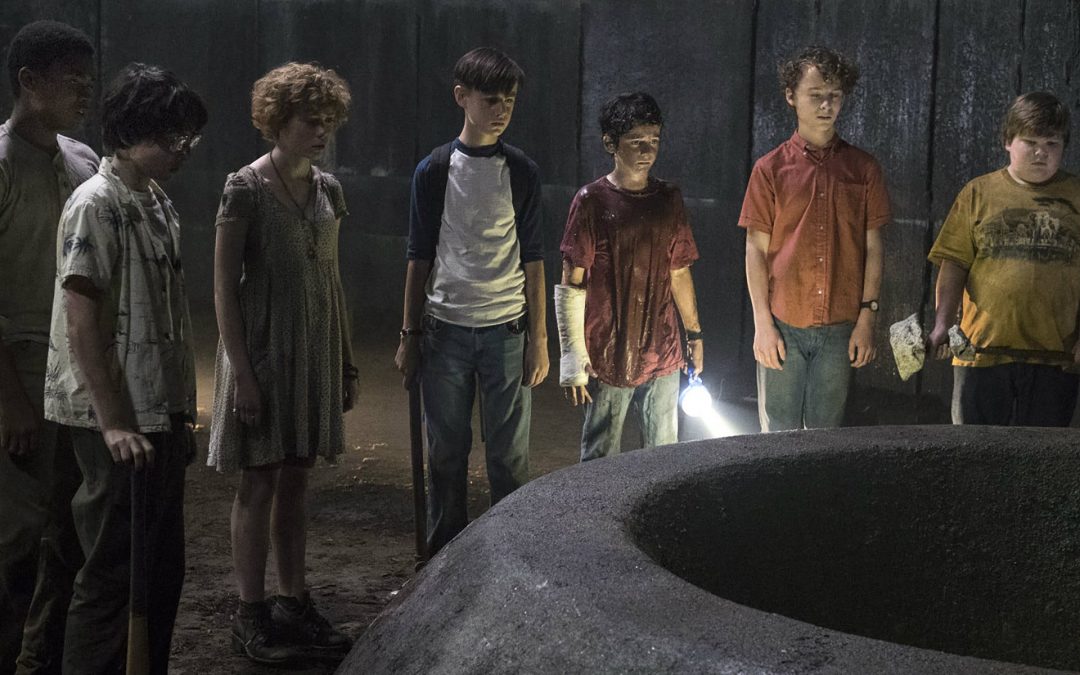 There have been so many Stephen King adaptations over the last four decades – many of them bad – that it’s easy to take them for granted. But there is something undeniably appealing about the sensibilities of this prolific author, a visual quality that translates effectively to the screen, and it’s something that director Andy Muschietti captures disturbingly well in his adaptation of IT… or at least, in this first half of the two-part film.

Stephen King’s seminal work about a group of put-upon children who overcome their fears – personified as a demonic clown – and later revisit their childhood traumas as adults has been adapted once before, in a 1990 TV mini-series. And although that version features a haunting performance by Tim Curry as the titular monster, its workmanlike presentation doesn’t come close to this new adaptation, which understands that King’s small-town nostalgia is purposefully grandiose. Memories of childhood have a tendency to take on a larger-than-life quality, a perspective which Muschietti interprets on film with romantic sentimentality half the time and grotesquely distorted funhouse-mirror theatricality the rest.

IT tells the story of “The Losers’ Club,” seven children whose seemingly idyllic summer vacation in 1989 is marred by the inexplicable disappearance of young people throughout the small town of Derry, Maine. They’d rather not have to deal with the horror closing in around them – who would? – but they cannot escape the increasingly vivid visions of their greatest fears. Those fears are brought to life by the gleeful nightmare clown Pennywise, played with gruesome, wall-eyed anti-charm by Bill Skarsgård, who is at times seductive, and at times the appalling personification of every scary clown meme on the internet.

Eventually, The Losers Club has to take up arms against this monstrosity, but before you can grow up you must first be a child. Muschietti understands the petty foibles and talkative ridiculousness of childhood friendships, and lets his dynamic young cast relish the screenplay’s snappy, spot-on dialogue. Exploratory missions into the sewers in search of a missing little brother are opportunities to reveal the way each kid approaches problems – with humor, anxiety, bravery, or careful analysis – and the way the pubescent boys each react to the newfound friendship of the young girl Beverly – interested, confused, annoyed, shy, suspicious – also adds to their relatable teenage drama. (Speaking of keeping things relatable: yes, Muschietti omits some of the weirdest things these kids do in the book. If you’ve read it, you know what I’m talking about. Yikes.) And these child actors are up to the challenge, creating memorable characters who could have easily carried a movie that didn’t have a monster in it and making this movie – which does have a monster in it – all the more intriguing. Their smack talk barely hides their individual anxieties about growing up, or pubescent physical changes, or entering a big, scary world that will force them to face their fears, whether or not a clown is involved.

IT spends a significant amount of its lengthy running time on each of The Losers’ Club’s personal experiences with Pennywise in sequences that are perfectly horrifying, if slightly repetitive. The formula begins to show itself as each child faces down their biggest phobia with similar resolutions, in succession: everyone has a distinct moment to wander off alone, look at the thing that scares them (a creepy painting, their own body, debilitating disease, and yes, even clowns) and then watch as that thing is warped to disturbing proportions by Pennywise. But even if you notice the pattern, each set piece is each different enough to be scary, and every character needs at least one moment to scream in terror. That’s because Muschietti has to lay the groundwork for a terrific and terrifying conclusion in which all of his characters are on the same, almost unbelievable page. When the time comes for the climax, the filmmakers up the ante, making Pennywise one of the most visually extreme horror villains on record. Skarsgård cavorts, contorts and – thanks to the ingenuity of the visual effects team – completely ignores the laws of physics to create a monster whose appearance is so unnatural it’s hard to believe your eyes. That’s why, for a long time, the members of The Losers Club don’t tell each other what they’ve seen, and why it’s all the more frightening when, surrounded by blood that only they can see, they no longer have the plausible deniability that maybe, just maybe, all of this trauma is a delusional manifestation of their deep-seated, but otherwise conventional psychological dread.

What makes IT, or at least this first half of IT (since the film adapts only the first half of Stephen King’s novel, with the latter half to come in a sequel), so beautifully, uncomfortably, and shockingly effective is that Muschietti gets right out in front of King’s story and tells the living hell out of it. Subtlety is the responsibility of the actors; the director is telling a scary story at a campfire, shining a flashlight under his face and taking advantage of everything he knows about his audience.

IT captures our affection for simpler times with constant visual references to 1980s nostalgia, like theater marquees showing double-features Batman and Lethal Weapon 2, or arcade machines of the Street Fighter 1. It’s no coincidence that this new version plays ‘80s nostalgia with the same unabashed sentimentality that Stephen King had for the ‘50s in his original telling of IT, and the film is using that as a weapon against a whole new generation. Emotions are more powerful when you’re a child because you’re experiencing them for the first time. To scare the living hell out of his audience, Muschietti forces us back into that naive mentality, and THEN rips us limb from limb.

IT is  probably the MOST Stephen King movie. Director Andy Muschietti evokes the horror author’s effortless melodrama and in-your-face psychological torments simultaneously, because he seems to understand that these sensibilities bring out the best and, by definition, the worst in one another. Nightmares are scarier when they emerge from happy dreams, and happy endings mean a heck of a lot more when unthinkable horror precedes them. And of course, everything is creepier with a scary clown in it.