E.T: An Adventure Out Of This World 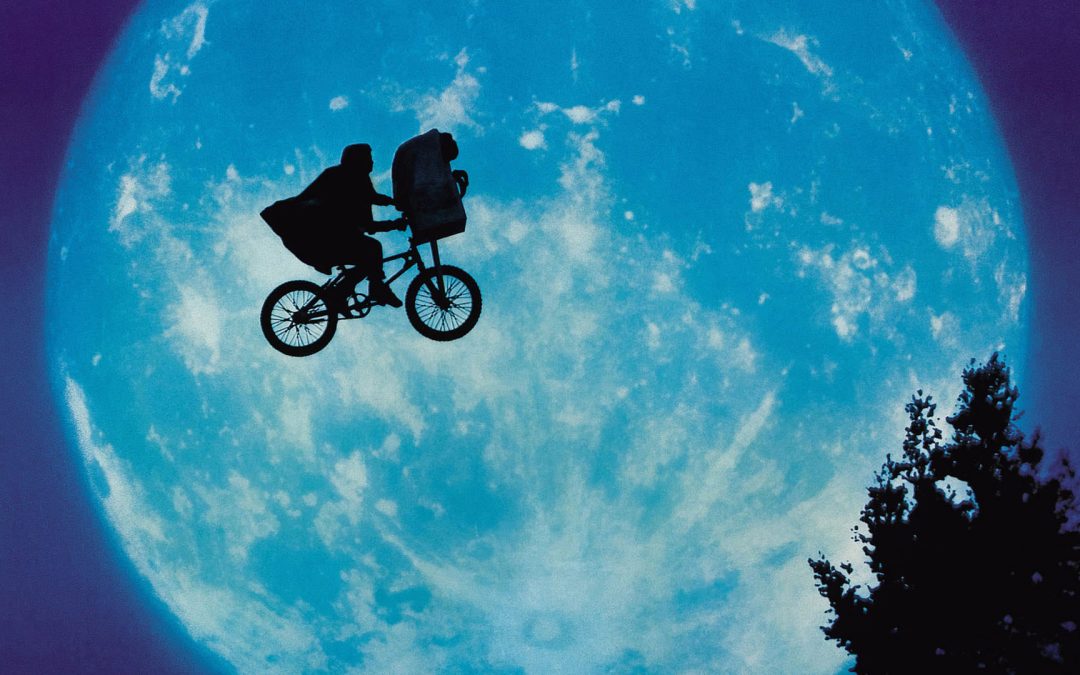 E.T. The Extra-Terrestrial (1982) is the immensely popular magical fantasy movie myth. Its estimated budget of $10 million was easily recouped when it became one of the box-office champion films of all time. Steven Spielberg’s very personal, heartwarming sci-fi masterpiece (with special effects produced by George Lucas’ Industrial Light and Magic Company) was warmly accepted by film audiences for its portrayal of the love between a young, fatherless suburban boy and a lost, benevolent and homesick visitor (presumably an adult) from another planet who is mistakenly left stranded and orphaned on Earth – three million light years from home. The film’s poster emphasized:

The film’s bittersweet themes include discovery, rescue, and escape, much like the Peter Pan myth (included in the film). The John Alvin poster for the film with E.T.’s glowing, heavenly fingertip also presents a religious theme, recalling Michelangelo’s ‘Creation of Adam’ painting on the ceiling of the Sistine Chapel. And the story of death and resurrection displayed parallels with the Biblical story. One of the film’s earliest working titles was A Boy’s Life.

Much of the film was deliberately shot from a lower camera angle – from a child’s point-of-view to manipulatively encourage younger viewers to identify with the characters, to simulate how overwhelming and threatening adults look to children (from the waist or knees down), and to force adult viewers to relive their own childhood. It was also shot in sequence, so that E.T.’s departure scene at its conclusion would contain genuine emotion.

Spielberg was working simultaneously on these two suburban-based stories: E.T. (as director) and Poltergeist (1982) (as producer) – but while one was a fantasy story, the other was a nightmarish horror story. This story of a beloved alien creature was the flip-side opposite of a later Spielberg film, War of the Worlds (2005), with destructive alien invaders. [Note: Its twenty year anniversary in 2002 was celebrated with the film’s restoration and re-release – a slightly longer version with additional scenes deleted out of the original (i.e., the bathtub scene), sound re-mastering and digital effects to enhance E.T.’s facial reactions, the spaceship, E.T.’s flight from faceless men through the forest, and the two bike-flight sequences. Guns used by the agents in the 1982 version were excised or digitally replaced with walkie-talkies, as was the line: “No guns – they’re children.” A reference to a “terrorist” was also changed to the word “hippie”. These modifications followed the trend of the times – to alter films slightly upon their re-release, as was also done with The Exorcist (1973) and The Exorcist: The Version You’ve Never Seen (2000), Apocalypse Now (1979) and Apocalypse Now Redux (2001), and Star Wars (1977) and Star Wars: The Special Edition (1997). However, the 30th anniversary Blue-ray edition of the film in 2012 undid the changes Spielberg made for its theatrical re-release 10 years earlier.]

Out of its nine Academy Awards nominations, it received four Oscars: Best Sound Effects Editing, Best Visual Effects, Best Score (John Williams), and Best Sound. The film lost in the categories of: Best Picture (it lost to Gandhi), Best Director, Best Cinematography, Best Film Editing, and Best Screenplay (Melissa Mathison, who was later married to star Harrison Ford – their scene in the film as the School Principal and Nurse was cut). This film, sometimes criticized as over-rated, was Spielberg’s biggest blockbuster up to that time. It also popularized Reese’s Pieces candy, Kuwahara bikes, and red hoodies.

While the film was regarded by some as a religious allegory or parable, the film more clearly identifies with many childhood experiences: a troubled, broken family with a single parent and no positive role-models, a lonely, disenfranchised boy lacking emotional fulfillment, a boy’s fierce caring for an equally-lost, stray creature or pet (also ‘broken away’ from his family), the need for friendship, the malevolent world of grown-ups and the perils of childhood, miraculous healing, wish-fulfillment, courage, transcendence, and homesickness. The tale is a variation of The Wizard of Oz (1939) for in this story, three young children assist a space creature to return to his home. It’s also been considered a ‘kids-version’ of Spielberg’s own Close Encounters of a Third Kind (1977), with an alien who is instantly established as a sympathetic creature. The film’s award-winning musical score by John Williams (who wrote the scores for Spielberg’s four previous films) enhanced the soaring, sentimental emotions of the film.