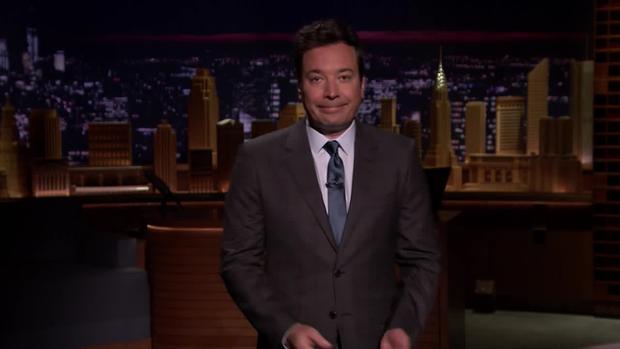 The nation’s late-night programs were poised Monday evening to take part in what is fast becoming an odd American ritual — attempting to help a nation shocked by a violent national tragedy.

“I’ve been doing this job for more than 24 years, and when I began in 1993, occasions like this were extremely rare,” said O’Brien in remarks delivered on his TBS show, “Conan.” “For me or any TV comedy host back then to come out and need to address a mass-shooting spree was practically unheard of.” Comedy Central’s Trevor Noah was even more blunt. “Just to give you an idea of how far away America is from actual gun control – this week Congress is going to vote on deregulating gun silencers. Because I guess Congress is thinking gun violence is out of control. How can we make it quieter?” said Noah during remarks delivered on tonight’s broadcast that were released ahead of time. “To the people of Las Vegas, I cannot give you thoughts and prayers. I can only say I’m sorry that we live in a world where people would put a gun before your lives.” Meanwhile, Meyers asked a question that seems unanswerable in this era: “Are there no steps we can take as a nation to prevent gun violence? Or is this just how it is and how it’s going to continue to be?”

In a cold open that saw a serious-minded Colbert addressing viewers from his desk, “The Late Show” host challenged President Trump and Congress to address gun violence by passing legislation to tighten restrictions on the availability of firearms. “Doing nothing is cowardice,” Colbert said. “Doing something will take courage.”As for Trump, Colbert urged the President to do something that his past two predecessors couldn’t accomplish. “Pass common sense gun control legislation that the vast majority of Americans want.”

In doing so, the wee-hours comedians are making what was once rare into the commonplace. For decades, the hosts rarely addressed moments of national tragedy. David Letterman famously provided a seminal example in 2001, offering up thoughts on the terrorist strike on the World Trade Center in September of that year. He was widely credited for helping the nation jump-start its engines after a shocking attack on its home shores.

But the incident was notable because it was seldom seen.

In recent months, perhaps due to a growing array of violent incidents and a social-media lens that magnifies them, more of the late-night hosts are addressing them – and gaining plaudits for doing so. Samantha Bee was the first to offer thoughts on the 2016 nightclub shooting in Orlando, for example, delivering a seven-minute monologue examining why assault weapons are easily obtained by criminals, and praying for the National Rifle Association to be hit with a plague of boils.

NBC’s Jimmy Fallon, who normally avoids politics, on Monday night, he opened his “Tonight Show” by briefly talking to viewers about the incident, then vowing to entertain them despite the sad news. The show opened with a musical number by Miley Cyrus and Adam Sandler. Fallon has nodded to other violent episodes in the recent past, taking time at the top of his show to talk about the recent incident in Charlottesville, Va. for instance.

Comedy Central’s Jordan Klepper, who launched “The Opposition” at 11:30 p.m. last week, urged viewers on all sides of the gun-control issue to try to think of ways to keep more people safe. And CBS’ James Corden, standing in front of his studio audience, told viewers that though some people think it’s “too early” to talk about gun control. “For those victims lasts night, it’s far too late.”

ABC’s Kimmel has gained notice in recent days for slamming Republicans’ effort to repeal Obamacare and replace it with a policy Kimmel thought would hurt people. The host has grown more active on the issue ever since the recent birth of his son, who suffers from congenital heart disease.

Kimmel delivered an emotional monologue Monday night. “I’ve been reading comments from people who say this is terrible, but there’s nothing we could do about it,” said Kimmel. “But I disagree with that – intensely. Of course, there was something we can do about it.” He added: “I don’t know why do our so-called leaders continue to allow this to happen? Or maybe a better question: Why do we continue to let them allow it to happen?” By the end of the speech, he was seen with a tear running down his face.

Kimmel called out President Donald Trump, Senate Majority Leader Mitch McConnell and House Speaker Paul Ryan. “They should be praying. They should be praying for God to forgive them for letting the gun lobby run this country because it’s so crazy,” said Kimmel.  He acknowledged the serious turn most of the late-night shows have taken in recent weeks: “I want this to be a comedy show.  I hate talking about stuff like this.  I just want to give you something to laugh about at night.  But that has become increasingly difficult lately.”