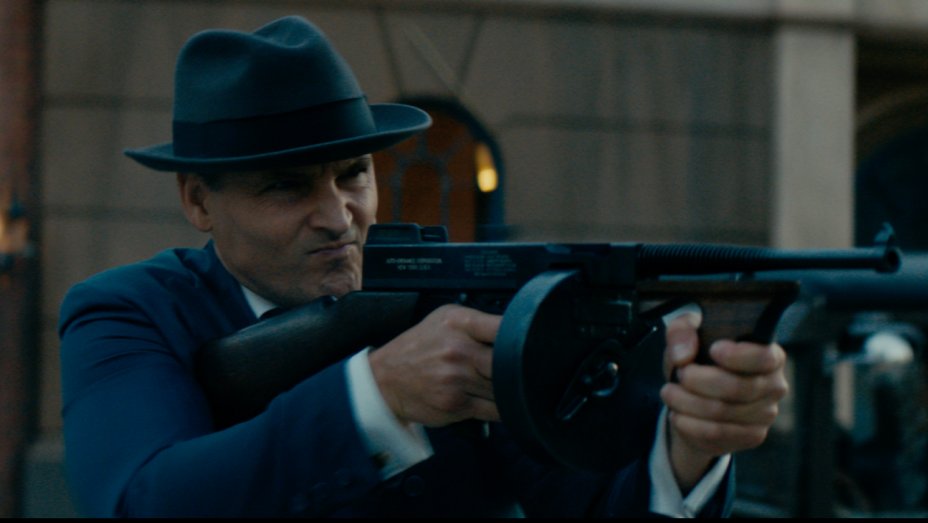 Timothy Woodward Jr. was born too late. Clearly the kind of enterprise that enabled this actor-turned-director to make no less than 13 features in the last five years for his own production company would’ve been ideally deployed in a “golden age” Poverty Row studio. And had they too existed back then, such reduced former A-listers as Tom Sizemore, Dolph Lundgren, Kris Kristofferson and Denise Richards probably still would have sooner or later found themselves toiling in Woodward Jr.’s joints, all low-budget actioners of one sort or another.

His latest is ambitious in the sense of being a period piece, something it pulls off with reasonable, resourceful aplomb even if the script (among other things) is too generic to result in anything more memorable than a passable time-filler. “Gangster Land” is not exactly good. But at least it’s farther along on the road to good than such prior Status Media efforts as “Gnome Alone” and the mysteriously all-caps “WEAPONIZED.” Given the gradually upticking arc of his opuses’ IMDb ratings to date, Woodward should finally score a 6 out of 10 sometime next year. He’s got the perspiration part down; surely inspiration can’t hold out much longer.

Jack (Sean Faris) is a nice Italian boy in 1922 Chicago, the son of immigrant shopkeepers. Trying to make it as a pugilist, his professional ring debut attracts attention from no less than Al Capone (Milo Gibson), at this stage just a subordinate working for Johnny Torrio (Al Sapienza). The latter’s Italian-American crime organization is engaged in bitter rivalry with Dion O’Banion’s (Mark Rolston) Irish-American one, particularly around bootlegging and booze smuggling in these early years of Prohibition.

Jack’s reluctant initial willingness to “make some real money” working on the wrong side of the law turns much more vengefully fervent when rival goons kill his father, who’s iced as a “competitor” for his strictly small-time winemaking. Capone also starts playing rougher — and taking over his boss’ role — once a bogus truce negotiated by O’Banion lands Torrio in prison. As turf wars tear up the town, Jack’s status rises, and he finds love with flapper chorus girl Lulu (Jamie Lynn-Sigler of “The Sopranos”). He just might achieve a happily-ever-after, albeit only if he can avoid the hail of tommy-gun bullets that steadily reduce the screen population here.

There’s plenty of violence in “Gangster Land,” though Woodward Jr. evinces no particular flair for staging it, so the rub-outs eventually grow monotonous. To a point, the film is carried along tolerably enough by brisk pacing and a decent overall look, even if the period flavor is often more approximate than precise, with good choice of locations doing most of the heavy lifting.

What ultimately keeps “Land” from rising above mediocrity — even to the level of guilty pleasure — is that Ian Patrick Williams’ screenplay is such a stock compilation of gangster tropes, the film has little chance of developing a personality all its own. Nor does the director’s handling of an uneven but mostly adequate cast encourage any distinctive interpretations, whether in the entirely fictive roles or those based on real-life figures. A bloody criminal-world shoot-em-up like this ought to at least offer the chance for some enjoyable scenery chewing. But nary an idiosyncratic moment surfaces, despite the employment opportunities provided for Jason Patric, Peter Facinelli, Michael Pare and others in supporting turns. With all the characters feeling like routine archetypes, there’s not much at stake emotionally, and a tragic epilogue proves little more than shrug-inducing.

Still, it remains impressive that anyone should attempt a full-dress “Untouchables”-type period bullet ballet on modest means. Woodward Jr. and company have moxie — they just need to take more stylistic and conceptual risks to kick their love of genre cinema onto a plane of homage that’s less blatantly imitative.