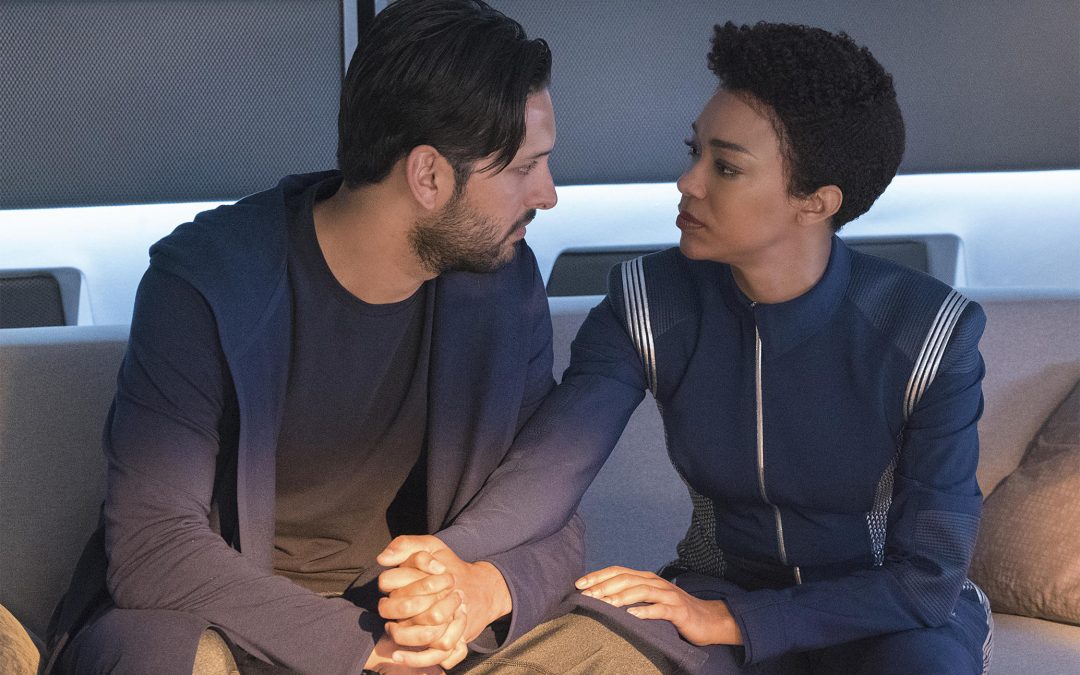 SPOILER ALERT: Do not read if you have not watched “Star Trek: Discovery” episode 11, “The Wolf Inside.”

When Shazad Latif was cast in “Star Trek: Discovery” more than a year ago, it was as Kol, a Klingon commander and tertiary character. Before shooting on the premiere began, he was recast as Lt. Ash Tyler, the security officer whose decaying mental and emotional state becomes central to the series’ season-one story.

On Sunday’s episode, “The Wolf Inside,” Latif’s promotion was revealed to be even bigger than it appeared. Trapped in the so-called Mirror Universe (a parallel dimension populated by doppelgangers) Tyler and Sonequa Martin-Green’s Michael Burnham come face-to-face with an alternate version of Voq, the chief apostle of the Klingon messiah T’Kuvma. A fight breaks out, and Tyler reveals to Burnham what the show had hinted at since the midseason finale — that he is Voq, surgically altered and brainwashed to infiltrate Star Fleet on behalf of the Klingon war effort.

“It’s been like a year’s worth of secrecy now,” Latif told Variety. “It’s been a year of keeping up a crazy secret that a lot of people figured out toward the end. That’s always hard. I couldn’t say anything. The whole set was quiet in general because it was ‘Star Trek’ anyway. It was like being in the CIA.”

“Discovery” fans online sussed out the secret dual nature of Latif’s role largely thanks to a quirk of the credits. Latif was not credited on the show until he first appeared as Tyler in episode five. In the first three episodes, Voq is credited as Javid Iqbal, an actor with no previous roles, no representation, and no photographs or trace of existence online. Fans theorized correctly that Iqbal was an invention to cover for Latif, as Tyler didn’t make his first appearance until after Voq disappeared on a secret mission.

The name itself — Javid Iqbal — had more significance than fans trading theories on Reddit appear to have realized. It belongs to Latif’s late father.

“I got to choose a pseudonym for this whole thing,” Latif said. “My father passed away six years ago. He was a big film buff.”

The role’s multiple facets presented challenges. One was vocal. Tyler speaks American-accented English. Voq, however speaks only Klingon in his first three episodes, and does so in a thick accent and guttural voice. Latif, a London native, created ways of speaking for the characters that would sound significantly different from one another but share subtle commonalities.

“I wanted to give Voq a softness,” Latif said. “He had a quiet sort of sentiment about him, an emotional character which bleeds into Tyler. That softness where everything just gets sort of coiled in the back of his throat, it felt right. Sometimes you’re just practicing stuff in your room and then suddenly something clicks.”

Another wrinkle was added in “The Wolf Inside,” in which Latif portrays the Mirror Universe version of Voq, who speaks only English and has a different temperament from that of regular Voq.

“That softness was the way he could express himself,” Latif said of Voq. “Then you have to keep that and transfer it to English. That was very scary, actually, with not much time to create that whole character. It’s complicated but fun.”

The end of “The Wolf Inside” leaves Voq/Tyler in a jam. He’s back aboard Discovery, on his way to the brig with his cover blown after trying and failing to kill Burnham — who was saved by the Mirror Universe version of Saru — and revealing that he killed Dr. Culber.

“I think he’s realized he’s bloody messed up, because if he’d got rid of Burnham and Saru hadn’t come in, he could have completed his mission,” Latif said. “He needs to get in to contact with L’Rel,” Voq’s Klingon comrade also imprisoned on Discovery. “He’s feeling like he’s failed T’Kuvma, he’s failed at all kinds of stuff. There’s so many things going on in that one moment. It’s quite brilliant.”