‘God’s Not Dead: A Light in Darkness’ -Film Review: 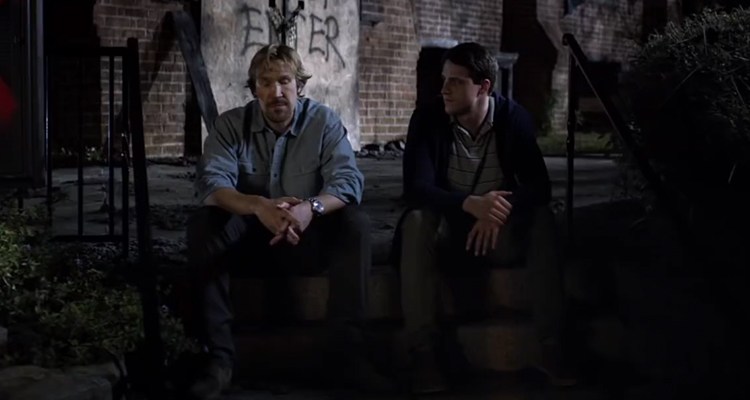 Even in these polarizing times, it’s not every faith-based drama that gets a title as stark in its certainty as “God’s Not Dead.” That movie, a specialty hit in 2014, and its notably less successful sequel, “God’s Not Dead 2” (can we all agree that the incandescent nature of the Almighty doesn’t exactly find poetic expression in the title “God’s Not Dead 2”?), both had a disputatious chip on their shoulder. They were dramas about the victimization of contemporary Christians, and they were righteously gauzy and a tad hectoring. They mounted strenuous arguments against the arguments against faith.

The first sign that “God’s Not Dead: A Light in Darkness” has a more inviting tone, that it’s still preaching to the choir but in a kinder, gentler way, is that it isn’t called “God’s Not Dead 3: Do You Believe Us Yet?” The third film in the series is set, like the others, in the groves of academia, a locale that allows the movie, once again, to tweak the liberal values it portrays as a cover for the new intolerance. Does the campus crusade for diversity, for example, include a proper degree of respect for Christian students?

Josh Wheaton (Shane Harper), the clean-cut talky student hero of “God’s Not Dead,” returns for a supporting role in this one, as the campus leader of Harbour House, and at one point he makes the meant-to-be-provocative statement that “Jesus was the ultimate social justice warrior.” He explains that Jesus fought for the marginalized, including women. It’s a good observation, delivered in Josh’s typical lawyer-for-the-Lord fashion, though as true as it may be it’s a hard point to hear without wondering for a moment: What would Jesus have to say about how his spirit of social justice is working out in the Christian community today?

In “God’s Not Dead: A Light in Darkness,” the clash of values plays out over nothing more (or less) than a chunk of real estate. At Hadley University in Hope Springs, the board members decide that it’s time to close down St. James Church, a hallowed but dusty institution that’s taking up a choice corner of land. The church predates the university, but since Hadley is now a state school, the board members have the right, under the law of eminent domain, to shut it down. But do they have the right under God’s law?

It’s just the kind of issue — secular academia versus the good Christians on campus — that Fox News would inflate into a holy war. And for a while that’s just how it plays out, complete with rancorous TV debates, as the issue gets ratcheted up on social media.

Yet the pastor leading the charge is as far from fire and brimstone as you could get. David Hill, known as the Reverend Dave, is shaggy and level-headed — a courtly, restrained true believer who, as played by David A.R. White, suggests a slightly crestfallen copper-blond-haired and goateed Paul Rudd. He’s not the sort of guy who starts trouble. But he’s been at this church his whole life (his father was the preacher there), and when the church basement goes up in a gas explosion, killing David’s African-American co-pastor (Benjamin A. Onyango), the good reverend springs into action. The university uses the violent incident as a pretext to shut St. James down, but Dave knows in his holy heart what Jesus would do: He’d fight to save the church! (Actually, Jesus might observe that the church is just a pile of stones and wood — and the movie, to its credit, ultimately comes around to that point of view.)

It’s my observation that critics tend to bash faith-based films a little too reflexively, and this one, taken on its own terms, isn’t bad in a TV-movie-fodder-as-parable way. Yet its arguments don’t pop out at you the way the first “God’s Not Dead” did. And that may seriously limit its appeal. As the reverend, David A.R. White, who is one of the film’s producers, gives a quietly good and original performance, portraying this man of the cloth not as a typical movie crusader but as a sexy-dumpy middle-aged slacker for God. He’s got a flirtation going with the local beauty who runs a soup kitchen (played, appealingly, by Jennifer Taylor), and his ’70s tresses humanize him, even if they’re a little too Chuck Norris-left-out-in-the-pasture.

The heart of the movie is the relationship between David and his lawyer brother, Pearce (John Corbett), whom he recruits to take on the university in court. Pearce grew up a Christian, but after three marriages and a triple bypass, he’s come down on the other side of faith. Corbett reminds you what a corny-sly actor he can be, and the back-and-forth between Dave and Pearce doesn’t feel rigged. It’s the sound of two brothers with deep roots who can’t bear, on some level, to think that they’ve grown this far apart.

The worst section of “God’s Not Dead: A Light in Darkness” is its hand-wringing subplot about the student who caused the church explosion. His name is Adam (Mike C. Manning), and he threw a brick through the basement window after learning that his girlfriend, the beautiful devout Keaton (Samantha Boscarino), was about to dump him for not sharing her faith. As the movie sees it, he blamed the church for his own spiritual shortcomings, and the way this plays out is far too diagrammed and instructional.

Yet “A Light in Darkness” doesn’t go where you think it’s going. As Dave pursues his fight, the chip falls off his shoulder. He comes, in his way, to embrace his enemies. And that makes the feel-good ending feel earned. But whether the message of extreme tolerance will be enough to win over the movie demographic we might refer to, at this point, as fans of faith is a very different question.

Film Review: ‘God’s Not Dead: A Light in Darkness’