Adam Sandler in ‘The Week Of’ 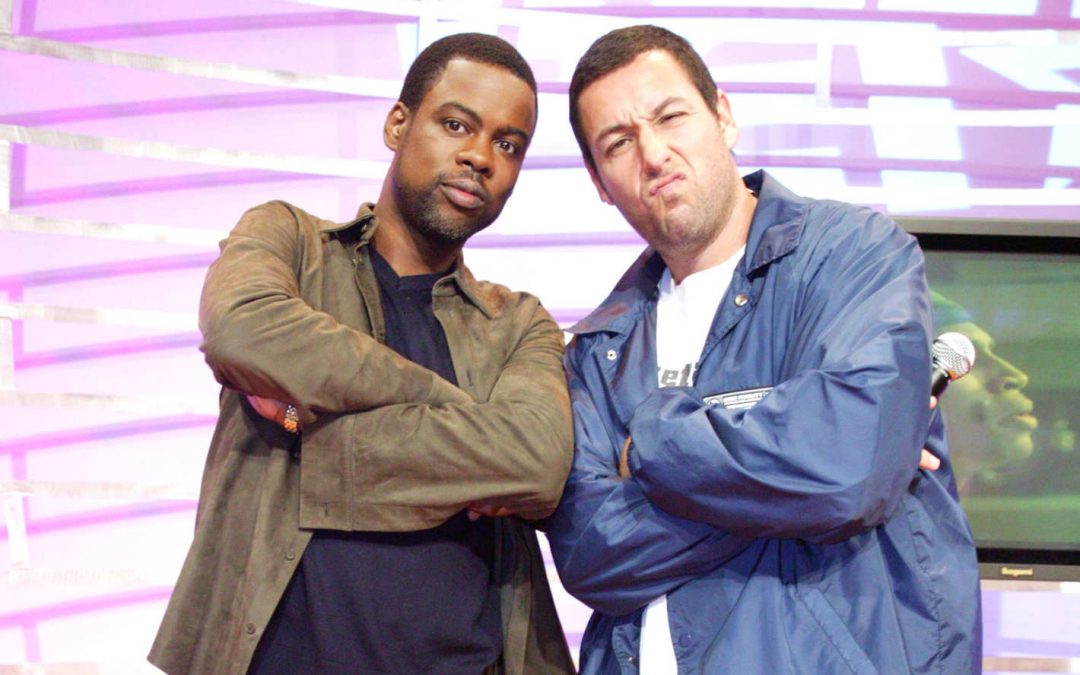 Adam Sandler and Chris Rock, together again? When it comes to combined star power, Netflix’s “The Week Of” can hardly compete with “The Avengers” (heck, it’s not even as glitzy as Sandler’s recent “Grown Ups” movies), and yet this latest reteaming of the two former “Saturday Night Live” comedians should earn its share of eyeballs this weekend, at least among those who weren’t clever enough to get their “Avengers: Infinity War” tickets in advance. Meanwhile, it allows Sandler to cross off yet another commitment in his eight-picture deal with Netflix — a steady source of mediocrity briefly interrupted by the release of Noah Baumbach’s “The Meyerowitz Stories (New and Selected)” last year, in which the actor reminded everyone of his actual potential.

Back in autopilot mode, Sandler phones in what may qualify as the lowest-concept comedy of his career — which, thankfully, is not the same as the lowest point in his career (that would be “Jack and Jill,” the cross-dressing debacle that began the downward slide that landed him at Netflix in the first place). He and his “Longest Yard” co-star play fathers of the bride and groom scrambling to plan a lower-middle-class, Long Island wedding: Sandler’s Kenny is poor/cheap, looking for the most affordable way to make the wedding a day his daughter will never forget, while Rock plays Kirby, a wildly successful heart surgeon who’s never really been there for his family but is more than willing to pick up the tab for a much fancier event.

Sandler doesn’t mind serving as the punchline for a fair amount of the movie, and some of those bits prove to be reasonably amusing, even endearing, as we come to realize that Kenny’s cost-cutting measures are, in their own strange way, a form of emotional generosity. So, while Kenny goes to great lengths to accommodate every guest’s special needs — including ornery double amputee Uncle Seymour (Jim Barone) and emotionally unstable Noah (Noah Robbins), a fresh-from-rehab teen with a laundry list of “triggers” to be avoided — the movie betrays that spirit of unconditional acceptance by treating them as freaks and weirdos.

It’s one thing to poke fun at eccentricity, as the movie does with Kenny’s pervy cousin (Steve Buscemi) and observational bits involving various extras, but beyond distasteful to rely on a legless old man for a running series of paraplegic jokes. While some gags are funny the first time around, practically everything in “The Week Of” overstays its welcome. Instead of spanning a full seven days of prenuptial shenanigans, the movie easily could have crammed the best stuff into a tight 24 hours (although we should be grateful that Sandler spared us the “Groundhog Day”-style infinite-loop conceit of last summer’s “Naked,” an even-more-tedious Netflix comedy in which Marlon Wayans is stuck repeating his wedding day until he gets it right).

Still, with the exception of “The Meyerowitz Stories,” Sandler’s Netflix projects share a dashed-off, first-draft feel. I blame Judd Apatow. Before “Funny People,” the average Adam Sandler movie ran right around 90 minutes, and though no one would accuse films like “Billy Madison” and “Happy Gilmore” of being high art, they felt relatively focused by comparison. By contrast, his Netflix projects tend to be sprawling and overlong (this one runs 116 minutes), as if the comedian assumes his audience is folding laundry or otherwise distracted when watching, and therefore can’t be bothered to give his work its full attention. He’s not wrong.