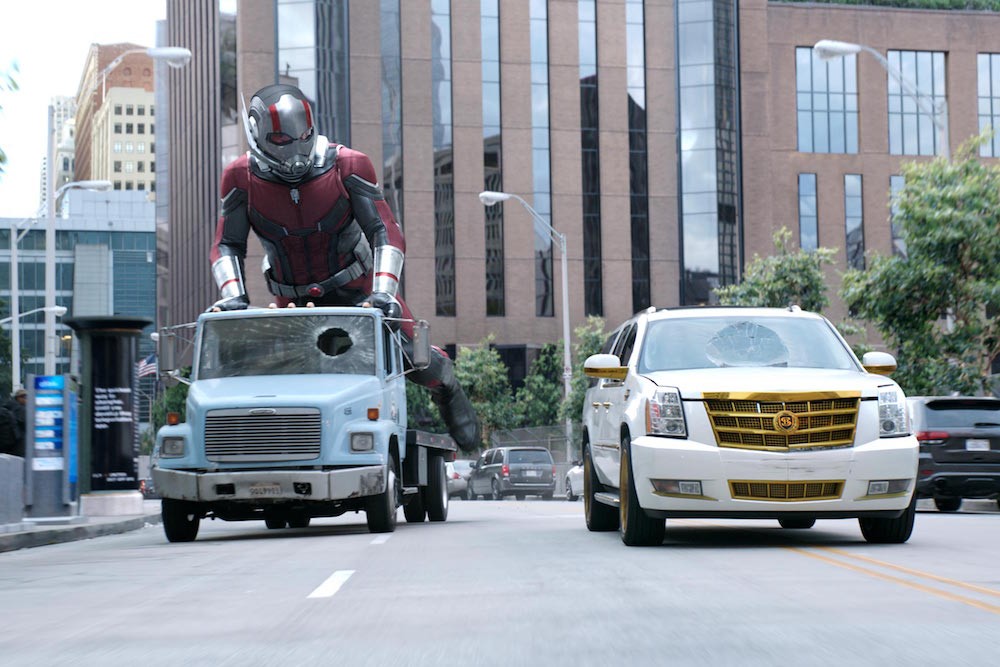 After a record-breaking second quarter, the domestic box office shows no signs of slowing down.

July looks to start strong as “Ant-Man and the Wasp” eyes a debut between $70 million and $80 million when it launches in 4,100 theaters on Friday. Fellow newcomer “The First Purge” is hoping to scare up a solid opening of its own, getting a jump on the Marvel tentpole by opening on the 4th of July. The fourth title in the “Purge” series should earn around $25 million during the five-day period.

If estimates hold, “Ant-Man and the Wasp” will start well ahead of the original “Ant-Man’s” $57 million debut. That Marvel movie went on to earn $519 million globally, including $180 million at the domestic box office. Paul Rudd and Evangeline Lilly reunite as Scott Lang/Ant-Man and Hope van Dyne in the film set between the events of “Captain America: Civil War” and “Avengers: Infinity War.” The follow-up sees Ant-Man teaming up with Lilly as the new Wasp to carry out a mission from her father, S.H.I.E.L.D. inventor Hank Pym (Michael Douglas). The cast also includes Hannah John-Kamen, Michelle Pfeiffer, Michael Pena, Walton Goggins, and Bobby Cannavale. Peyton Reed, who oversaw the first film, returns to the director’s chair for the 20th iteration in the Marvel Cinematic Universe.

Praise seems to be even stronger for the superhero sequel, which holds a promising 85% on Rotten Tomatoes. The first film, which also received universal acclaim, came in slightly lower with a 82% Rotten Tomatoes average.

“Ant-Man and the Wasp” comes on the heels of Marvel’s recent string of box office hits. “Avengers: Infinity War” has racked up over $2 billion and counting, while “Black Panther” hit $1.3 billion globally.

“The First Purge,” Blumhouse Productions’ latest collaboration with Universal Pictures, is opening in 3,000 theaters on Independence Day. A mid-$20 million bow would be promising given the film’s $13 million price tag. The fourth installment in the “Purge” franchise — starring Y’lan Noel, Lex Scott Davis, Joivan Wade, Luna Lauren Velez, and Marisa Tomei — takes audiences all the way back to, you guessed it, the inaugural purge. “The First Purge” introduces the deranged 12-hour period set in a dystopian America where all crime is legal.

The prequel is written and produced by James DeMonaco, though it is the first film in the series he didn’t direct. Gerard McMurray took over filmmaking duties this time around, while Michael Bay, James DeMonaco, Andrew Form, Jason Blum, Bradley Fuller, and Sebastien Lemercier are producing. The most recent “Purge” was 2016’s “The Purge: Election Year,” which ended its theatrical run with $79 million in North America and $118.5 million worldwide. Combined, the franchise has earned $320 million globally. Universal is handling the international rollout, which opens day-and-date with the U.S. in 27 overseas territories.

After its two-week reign, “Jurassic World: Fallen Kingdom” will likely slip to the No. 2 spot. “Incredibles 2,” now in its fourth frame, looks to deliver solid returns as well. Universal Pictures and Amblin Entertainment’s “Jurassic World: Fallen Kingdom” has pocketed $265.6 million domestically and $669 million overseas. The dinosaur tentpole starring Chris Pratt and Bryce Dallas Howard should hit the $1 billion mark this week. Meanwhile, Disney-Pixar’s “Incredibles 2” holds a worldwide tally of $648 million, including $440 million in North America. In three weeks, it has already surpassed the entire theatrical run of 2004’s “The Incredibles” ($633 million).

At the specialty box office, Annapurna is releasing “Sorry to Bother You” in 16 locations. The comedy debuted at this year’s Sundance Film Festival, where it was praised for its humor and originality. Set in an alternative present-day Oakland, Calif., “Sorry to Bother You” follows Lakeith Stanfield as a young black telemarketer who beings to excel at his job once he adopts a white accent. The directorial debut from rap artist Boots Riley boasts an impressive 96% on Rotten Tomatoes. Tessa Thompson, Jermaine Fowler, Terry Crews, Patton Oswalt, Danny Glover, and Armie Hammer round out the cast.

Roadside Attractions’ “Whitney” — an expose on the life and career of Whitney Houston — will attempt to join a number of recent documentaries that have made their mark at the box office when it premieres this weekend in limited release. Kevin Macdonald’s feature, which screened at Cannes, has received favorable feedback.