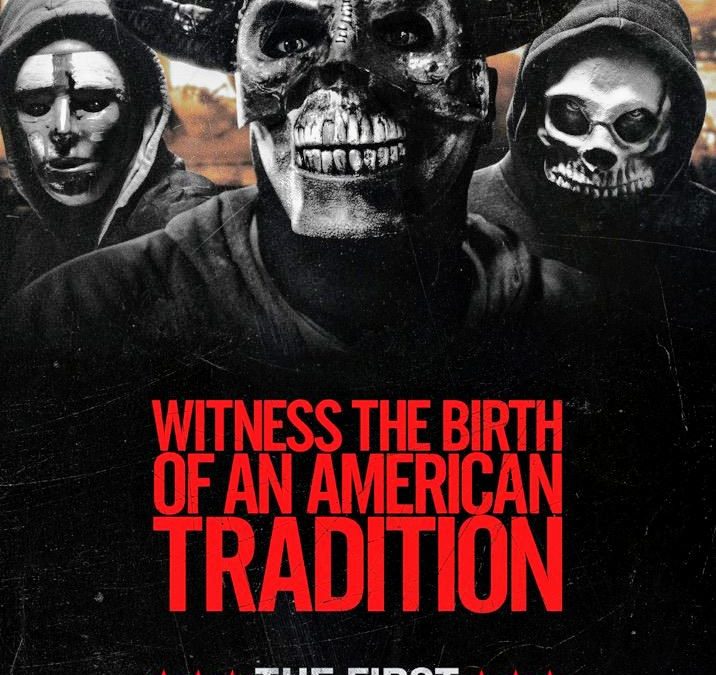 In “The First Purge,” the National Founding Fathers of America — they’re the kind of fascists who pretend not to be — launch an audacious (or maybe it’s just sick) experiment in state-controlled chaos: a 12-hour zone of anything-goes bedlam in which the crimes you commit, from petty theft to brutal murder, are all legal. It’s an experiment that treats the people who participate in it as human lab rats, and those who designed it choose what they believe to be the perfect homicidal playground: Staten Island, the least sexy and most self-contained borough of New York City. If the experiment “works” (i.e., if it proves that there are enough people out there who seriously want to f— each other up), then the NFFA will take it national.

As the Purge begins, a cackling psychopath named Skeletor (Rotimi Paul), who has a shaved head, a crazed grin, a set of African tribal scars, and the popping eyes of a zombie, holds up a man at an ATM and goes nuts with his dagger. A drug kingpin named Dmitri (Y’lan Noel), who is cool, calm, and collected, has to fend off an attempted coup by one of his lieutenants, who has lined up a couple of ladies to seduce and purge the boss. The plan doesn’t work, and Dimitri winds up purging him.

It is, in other words (nudge, nudge), a typical night in the hood.

One of the semi-jokes of the “Purge” films, with their hooky set-ups, their mostly cruddy lighting and staging, and their “Clockwork Orange”-meets-Roger Corman graze-Z nihilism, is that they’re rooted in a preening sort of “sociology” that’s tuned into the zeitgeist but, at the same time, comes off as more than a little mindless.

That’s true of this prequel as well. It’s the first “Purge” film to be set in the inner city, and that allows it to play off the notion that the government is only too eager to trash the lives of African-Americans, in a way that echoes the social paranoia of the ’70s and ’80s, when the heroin and crack epidemics were believed by many to be the deliberate fallout of racist government policies — a way of narcotizing the underclass.

On Staten Island, where the action clusters around the Park Hill Towers housing projects, each of the Purge participants gets $5,000, with the price set to go up the more mayhem they commit. They wear video contact lenses that give them the look of iridescent-eyed aliens, and everything that happens is broadcast, with a kind of lip-smacking “Hunger Games” breathlessness, by the national news media. But if there’s a message buried in there somewhere, one that’s designed to power a B-movie for the age of Black Lives Matter, “The First Purge” isn’t without its own whiff of exploitation.

It’s likely that the film’s Purge-in-the-hood concept had more than a little to do with the success that Blumhouse, the franchise’s key production company, enjoyed with “Get Out.” Yet if a “Purge” film built around the lives of African-Americans seems a totally good idea, and is more than likely to prove a commercial one, coming from Blumhouse it only highlights the difference between the two films. “Get Out” was a thriller with a devious texture, rooted in social and psychological experience. “The First Purge” is a slipshod dystopian pulp comic book rooted in gangbanger clichés. It’s a threadbare “Boyz N the Hood” meets “Lord of the Flies.”

The movie opens with one of those America-descending-into-social-anarchy montages that have been a cinematic staple since “World War Z.” Only now, of course, it feels more timely than ever, because it taps right into the hater nation we’ve become. Part of the dramatic promise of “The First Purge” is that it will show us how the original Purge boiled up out of the cauldron of a newly seething America. But no: From the start, the Purge is all planned, the whole thing designed as a government conspiracy. And, in fact, it barely even works. When the night is halfway over, the scientist who created it, Dr. May Updale (Marisa Tomei), and the sleazy NFFA chief of staff, Arlo Sabian (Patch Darragh), observe that there isn’t enough purging going on to give their experiment the kicky publicity it needed. Something has gone wrong. Where is all the uncorked id?

Those who see “The First Purge” may ask the same question. I found the last “Purge” film, “The Purge: Election Year,” to be the most rousing of the series — an outrageous cartoon allegory. But “The First Purge,” which is the first entry in the franchise not to be directed by James DeMonaco (he wrote the script but has handed off the directorial reins to Gerard McMurray), just sort of skulks along. The film basically says that all of America wants to purge — except for those in the inner city, who are too desperate, or goodhearted, or something to even bother. That’s actually a rather pious idea, and “The First Purge,” for much of its 97-minute running time, is the most slovenly and joyless of the four “Purge” films. Actors like Y’lan Noel, as the world’s nicest drug kingpin, Lex Scott Davis as his dreadlocked righteous-activist former girlfriend Nya, and Joivian Wade as her little brother, Isaiah, who signs on to purge as a coming-of-age rite of passage, do what they can with perfunctorily written roles.

Yet if it takes too long to get there, the movie does finally build to something kicky, starting around the time that government-sanctioned purgers show up in Ku Klux Klan hoods. To save himself and his loved ones, Dimitri has to turn into a kind of righteous black Rambo figure, and the movie’s last half hour, with its strobe lighting and disquieting alarm bells, packs a punch, in no small part because its iconography is incendiary. The “Purge” films have always been violent satires of a society that has lost all civility. In “The First Purge,” we watch death squads act out the will of a government that wants to reduce America to a race war, and though the staging remains crude, it’s getting harder with each film to pretend that this is all just a fantasy.