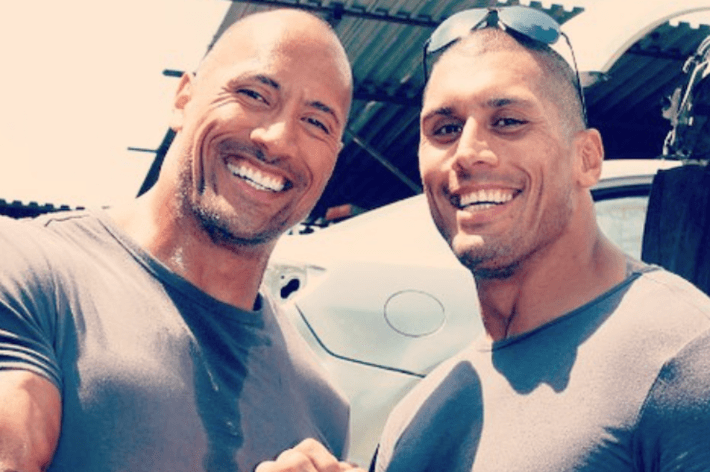 He’s known for charming the masses as a leading actor on the silver screen.

But Dwayne ‘The Rock’ Johnson proved his heart of gold is almost larger than life as he surprised his longtime stunt double and cousin Tanoai Reed with a custom truck.

The 46-year-old actor shared a short video to his 111 million followers on Monday afternoon of the surprise reveal, which left a grateful Reed in tears.

‘I love you brother and enjoy your new truck,’ Johnson wrote in a lengthy caption. ‘Over the course of my career, my stunt double (and cousin) Tanoai Reed has broken multiple bones, severed tendons, torn ligaments & just been an overall dominating bad ass achieving several “Stuntman of the Year” honors.’

During the quick clip, Tanoi was under the impression he was being interviewed about his career working alongside The Rock.

‘Scorpion King was our first movie together,’ Reed said before Johnson chimed in, ‘When I saw him, I was like oh my god he looks like my twin.’

The pair stand together outside for the interview while Dwayne starts to let his cousin in on the big reveal.

‘The truth is, he’s been an incredible partner and brother to me,’ Johnson said. ‘It’s been an honor, uso, and I want to say from the bottom of my heart, I love you and I thank you and enjoy your new truck.’

Dwayne points to the massive black truck while an incredibly surprised Tanoai stares in shock before crying.

‘Thank you, uso,’ Reed says between tears, acknowledging their strong Samoan roots through the term which means ‘brother.’

‘Seventeen years of him giving his blood and his sweat,’ Johnson said. ‘I mean … this is a small token of my appreciation.’

His Instagram caption continued, ‘Not only does Tanoai represent our family and my career with relentless commitment and passion. He also represents an entire Hollywood stunt community that is truly the backbone of our business.’

Johnson became one of the greatest professional wrestlers of all time after a nearly 10-year stint in the World Wrestling Federation.

His first leading film role was in the 2002 flick The Scorpion King and he has since become one of the highest paid and most powerful actors in the industry, according to Time and Forbes.