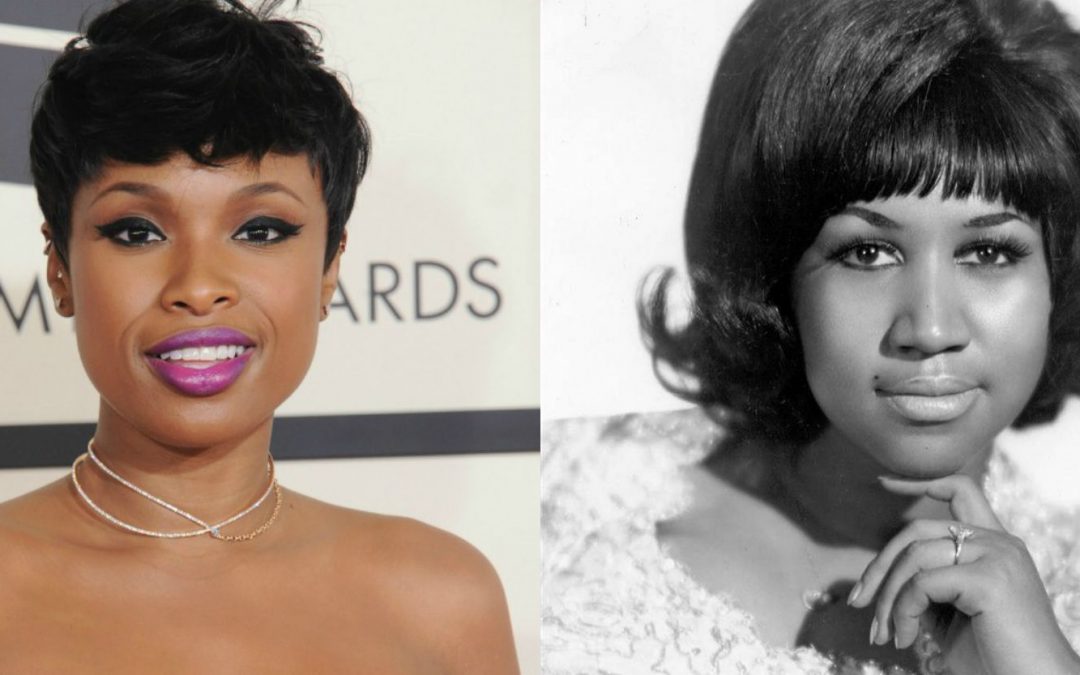 The Queen of Soul was never the queen of the big screen. At least when it came to playing someone other than herself, Aretha Franklin’s acting appearances were limited to her performance in “The Blues Brothers” and its sequel and an episode of “Room 222.” But in death, if not life, she may yet become a movie star, of sorts, if the producers of two long-gestating projects get their way. But it remains to be seen whether her death Thursday might accelerate or further bog down the path either project faces on the way to theaters.

One is a long-planned, authorized biopic now in the hands of MGM, which would star Jennifer Hudson as a young Aretha, and which Franklin was discussing on the phone with her collaborators up through last week. The other is a legendarily long-shelved documentary/concert film, “Amazing Grace,” that was filmed and abandoned in 1972, rescued and completed in 2010, and then lost to legal limbo as Franklin left its release tied up in court for the last eight years.

The untitled MGM drama, meanwhile, was happening not only with her approval but at her behest and under her complete control. It, too, has been talked up in some form or another for decades — if not for as many decades as “Amazing Grace,” then at least since the publication of her memoir, “Aretha: From These Roots,” in 1998. For years Franklin touted a script she was working on with “Ray” director Taylor Hackford and spoke publicly about how she hoped Halle Berry or possibly Audra McDonald would star. When Clive Davis took time at his pre-Grammy gala to say Hudson had signed on (followed by her performance of “Think” and “Respect”), some took it to mean the biopic was being fast-tracked. But there is no director or script, and some rights are still in the process of being acquired.

“We spoke many times a week, some weeks,” says Harvey Mason Jr., who’s produced about a dozen songs for Franklin and had come on board to produce the film within the last year and a half. “I knew she had been resting and recovering from different treatments, so some days she had more energy than others. But I definitely did not have any early indication that she was going to pass away. In the last conversation I had with her last week, she was really optimistic and talking a lot about the movie — and talking a lot about how excited she was to get back on the mic. ‘I just can’t wait to get back on the mic!’ — she was constantly saying that; that was her thing.”

Franklin had also talked about going back in the studio with Mason, but that hadn’t come to fruition, and the film was her primary creative concern in her final days. “She was my partner in doing this,” Mason says, “and we had a lot of hours invested with her in thinking and dreaming about how it would come out. So it’s hard on all levels. It’s really hard losing a friend, but then it’s also hard losing someone who’s a national treasure and whose music has changed the world. And then on the third level, it’s hard losing a partner in a movie. Hopefully we can make a film that people can remember her by and can look to for comfort and good memories and smiles.”

The focus on smiles confirms that Franklin wanted to make a biopic as upbeat as the autobiography, co-written with David Ritz, that reviewers described as “accentuating the positive.” (A later biography, also written by Ritz, took a more honest approach, which she disliked.) To that end, she wanted the script to focus on her early years, “showing her coming into her greatness and finding her voice and becoming the queen of soul.” Mason hadn’t heard of reports from the early 2000s that she was okay with making a Lifetime movie. “Whenever I spoke to her, she always wanted it to be an international blockbuster type of film, and she kept referencing ‘Ray’ or ‘Dreamgirls’ or the Tina Turner or Johnny Cash movies, saying, ‘Let’s push to make mine that special.’” Mason won’t say whether it’s set to officially be based on her memoir. “We’re not really divulging yet what it’s based on, but I can definitely tell you that it’s (also) based on my countless hours of conversations with Aretha and the notes that I’ve taken and things that we’ve gone back and forth on.”

Countless hours had also been spent in recent years talking about “Amazing Grace” — among lawyers, agents, managers and judges, all trying to sort out the mess that has kept the general public from seeing what many insiders who’ve seen it privately believe will come to be regarded as one of the great concert films of all time.

“Amazing Grace” nearly rivals Orson Welles’ “The Other Side of the Wind” as having had the most tortured and convoluted path to the screen. Director Sydney Pollack, hot off his first Oscar nomination for “They Shoot Horses, Don’t They?,” shot the footage over two nights at a Baptist church in Watts in 1972, as Franklin was recording the album of the same name, which would soon become her bestselling project and the most successful gospel album ever. The “Amazing Grace” LP jacket even included a printed admonition to look for the forthcoming film from “Sidney (sic) Pollack.” But, being a documentary novice, Pollack didn’t use clapper boards for any of the five 16mm cameras that captured 20 hours of footage, and frustrated editors weren’t able to piece together even a complete song from the fragmented images and sound. In the fall of ‘72 Warner Bros. shelved and wrote off the film and Pollack moved on to “The Way We Were.”

Pollack faxed Franklin about possibly taking another crack at it in the late ‘90s, but it wasn’t till the mid-2000s when Elliott took a more passionate interest in looking at the raw footage. With some nudging from agent Ari Emanuel and friends Alan and Marilyn Bergman, Elliott was able to buy the unfinished film from Warner Bros., and Pollack, by then terminally ill, urged Elliott to tackle it on his own. He found a digital company that was able to synch sound and picture in a way not possible three and a half decades earlier. But when a trailer was released in 2010, Franklin sued to stop its release, claiming unlicensed use of her likeness.

Thus began a process even more intractable than synching sight and sound: synching lawyers. Elliott made an out-of-court settlement with Franklin, agreeing to put off the release indefinitely because it seemed that she alone had not signed a release for the film. Then Warner Bros. found in the archives a personal services contract signed by Franklin in 1968, shortly after mergers and acquisitions had generated a new Warner corporate umbrella that included both the Warner Seven Arts division and her then-label, Atlantic. Elliott contended he no longer had to abide by the settlement because he had produced the contract he said covered her work on the film, and he ultimately made plans to premiere it at Toronto and Telluride. On the eve of the latter fest, Franklin pulled the Telluride fest’s lawyers into court in Denver and got an injunction. The last legal rendering, put forth by that Colorado judge three summers ago, was that both parties negotiate in good faith to arrive at an agreement.

At Toronto in 2015, where the film was also enjoined from public screening, Elliott’s camp made a multi-million dollar deal with Lionsgate that included the $1 million they were being told Franklin wanted to approve its release, which would have included her filming an introduction and doing press. That deal fell apart when Franklin failed to sign off on the deal. A year later, a different deal was made with Concord, again with a million set aside for Franklin, and Elliott took a print back to Telluride, believing her lawyers were going to fax him her signature in time for a premiere. That never happened, although it wasn’t clear whether she soured on the deal, was never aware of it, or was just operating on a well-known preference for oral deals over contracts.

Since then, sources say, there’s been little negotiating, leaving Elliott wondering where that leaves the Colorado judge’s 2015 order. Hopes of igniting Franklin’s approval faded as her health took a turn for the worse and she focused her film-related attention on the biopic. Whether her estate will take a greater interest in signing off on a third deal — if Elliott can find another distributor interested in taking the risk — is still an open question.

Franklin didn’t lack for attempts at friendly persuasion in her lifetime. Mick Jagger, who is seen amid the congregation with Charlie Watts at the original taping, publicly stated his eagerness to see the picture. Questlove wrote on his blog in 2015 that, as a fan, he had personally tried to convince her in his six previous encounters with her to approve the film, saying, “Of all the ‘inside industry’ stuff I’ve been privy to learn about, nothing has tortured my soul more than knowing that one of the greatest recorded moments in gospel history was just gonna sit and collect dust… I plead, much to her chagrin, ‘Please sign off on this film so the world can truly know you are the greatest.’…. This is easily Oscar documentary material.”

If Questlove were to prove right on that prediction, Pollack could be Oscar-nominated more than 10 years after his death, and somewhere close to half a century after shooting the film. But until such a thing happens, “Amazing Grace” may remain the most famous film ever to be exhibited almost exclusively at the William Morris screening room.

As for Franklin’s dream biopic, Mason isn’t any more likely to predict a release date. “With Aretha’s passing,” he says, “obviously we don’t have those conversations that were taking place up to as late as a week ago, so we really have to take a beat here and reassess how we’re going to move forward. But I feel like I know what the standards are that she was expecting and what needs to be done so we can do this in a way that really honors her and carries out her wishes. Some of it will be determined by how quickly the script comes together. And since Jennifer is filming a couple other movies and does ‘The Voice,’ sitting down and figuring out her schedule will determine a lot of things. But it’s hard to do when we’ve just lost a legend.”