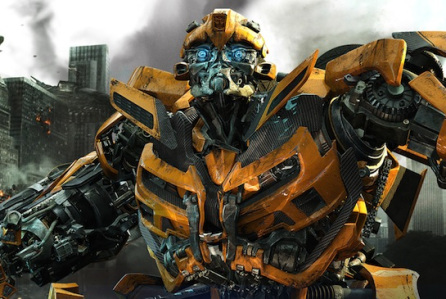 Imagine, if you can, a “Transformers” movie in which the plot is coherent, the robots feel like characters (as opposed to gleaming CG creations), and the action is staged and edited clearly enough to follow. After five rock ’em, sock ’em blockbuster features, it has become clear that audiences would never get such a film as long as Michael Bay occupied the director’s chair, and though he should certainly be credited for proving that a Hasbro toy line could support a massive global franchise, “Bumblebee” is basically the movie that fans of the 1980s animated series wanted all along.

The fact that it was helmed by an animation native — that would be “Kubo” director, and CEO of Laika studios, Travis Knight — and conceived as an origin story, rather than a reboot, for one of the franchise’s most popular Autobots (the good-guy robots that transform themselves into cars) suggests a fresh opportunity for the franchise: a chance to make a quieter, more character-driven film that finally delivers “more than meets the eye.” Before Bumblebee was a Camaro, he was a humble VW bug, and this movie takes us back to that incarnation, eschewing Bay’s signature “braaams” (those deep, bone-vibrating mechanical blasts) for the peppy put of a four-cylinder engine.

That’s a major course correction for a bombastic series that, although exec produced by Steven Spielberg, reflected few of his core storytelling values. By contrast, “Bumblebee” embraces the tried-and-true Spielberg formula, wherein supernatural circumstances serve to bring strained suburban families closer together. Screenwriter Christina Hodson clearly imagined “Bumblebee” as a throwback to classic Amblin-style boy-and-his-dog movies, directly channeling elements of such films as “E.T.,” “Harry and the Hendersons,” and “*batteries not included” (there’s a running joke about the adopt-an-alien sitcom “ALF” being popular at the time).

You won’t see Paramount plastering this observation on any of its advertisements, but “Bumblebee” could also be seen as a less-original rehash of the studio’s unsuccessful “Monster Trucks” movie of a couple years back, with a gender-flipped protagonist. Here, the hero is high school student Charlie Wilson (Hailee Steinfeld), who discovers a dilapidated VW bug sitting in her uncle’s junkyard and fixes it up, only to discover that it’s not a car at all but — wait for it — a robot in disguise. Knight sets that particular montage to the sound of Steve Winwood’s “Higher Love,” a random ’80s cut that will register as retro with younger audiences, earning the desired laugh, so long as no one stops to question how the lyrics are supposed to fit the scene.

Set in 1987, the movie is stuffed with other such throwaway period details: Tab cola, rotary phones, rabbit-ear television sets, and the primitive Pong video game (at a time when most homes would have had classic NES systems). Occasionally, the screenplay takes these nostalgic elements a step further, as when Charlie’s new robot sits himself in front of the TV to study old VHS tapes, adopting Judd Nelson’s freeze-frame fist pump from the end of “The Breakfast Club” into his pantomime routine. He has to be creative about communicating, since a Decepticon ripped out his speech synthesizer in his first battle on Earth (the plot posits that Optimus Prime has sent Bumblebee ahead to scout the planet as a possible new home for the endangered Autobots), eventually learning to express himself by shuffling between radio stations.

Bumblebee — so named not because he has chosen a bright yellow VW bug as his preferred form of camouflage or because the car is swarming with honeybees when Charlie finds it but on account of the weird buzzing noise his broken voice box emits — is basically the best pet any teenager could hope for: Though equipped with blaster cannons and a huge retractable sword, he’s like a giant, obedient puppy the rest of the time, the care and maintenance of which becomes a full-time responsibility for Charlie, who also holds down a fairground job at Hot Dog on a Stick, where the “churro guy” (“Love, Simon” favorite Jorge Lendeborg Jr.) has a crush on her.

While it’s nice to see the “Transformers” movies recognizing a woman as something more than a drool-inducing male fantasy, Charlie isn’t so much three-dimensional as she is composed of three or four one-dimensional character traits: She’s a loner who listens to the Smiths and shows her nonconformity at school by wearing the uniform of teenage rebels everywhere; she’s the oldest child in a middle-class, single-parent household where her father’s death has left an emotional hole; and she loves to tinker with cars in her spare time, savvy enough to know when a job calls for a 1/2-inch socket wrench, even when the professional mechanic calls for another tool.

Oh yeah, she’s also a champion high diver, which is a strange kind of throwaway detail, included for the sake of the most literal-minded illustration of peer pressure in the history of cinema: At one point, wedged into the middle of the movie, Charlie finds herself forced to confront the age-old hypothetical question, “If everyone else jumped off a cliff, would you jump too?” The inclusion of this out-of-the-blue challenge feels like some kind of inside joke (a wink to someone’s parent, perhaps), especially when one considers its placement immediately following a scene in which Charlie blindfolds herself while driving along a stretch of dangerous coastline to prove that her new VW bug can steer itself.

The movie’s most memorable human character is played by John Cena, who witnesses Bumblebee’s arrival as a flaming meteor (at that point, the Autobot is transforming into a Jeep), barely surviving the ensuing firefight. Representing the ominous governmental authority figure determined to capture and/or experiment upon such misunderstood aliens in movies like these, the former wrestler looks plenty intimidating in military garb. But he also brings a welcome sense of humor to the mix, holding his own against the gargantuan CG co-stars.

With his background in animation, Knight approaches the robot characters differently than Bay did, treating them as more than just flashy visual effects. He slows down the transformation scenes, so audiences can admire — or imagine that they are actually seeing — how they fold and twist from one shape to another, though it’s still all CG sleight-of-hand. The movie opens with and returns several times to a fully animated robot battle on planet Cybertron, which is dull stuff (although it does allow for fan favorite Soundwave and attack dog Ravage to finally get a decent scene, previously limited by their impractical disguises as a giant tape recorder and detachable microcassette). By contrast, it’s far more satisfying to watch moments of subtle character animation, as Bumblebee cautiously learns to trust his new human friends.

Still, while it’s easy to pick on Bay, “Bumblebee” benefits enormously from creative decisions that have come before: the robot designs, the basic sound effects, the warm, vaguely gold-burnished look of DP Enrique Chediak’s live-action footage — all of these things trace back to the template Bay set in the previous five films. And, of course, Bay risked his reputation making a movie based on a popular ’80s toy franchise, where the pitch to audiences at the time was basically the notion that if any director could make those ridiculous robots look cool in live action, it was the man whose every movie looks like a super-polished car commercial. “Bumblebee” shows that there’s room for a bit more nuance within the formula, but if you break it down, this relatively enjoyable film is made entirely from recycled parts.