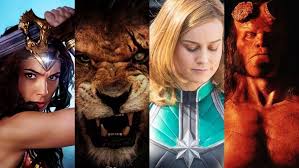 It seems like 2019 will be the year of sequels, adaptations, and reboots, but with “Avengers: Endgame” and “The Lion King” on the horizon, we’re not complaining. Cinematic storytelling and special effects have never been stronger, so whether it’s family-friendly fare like “The Lego Movie 2” and “Frozen 2,” or darker vehicles like “Pet Sematary” and “Glass,” there’s a lot to look forward to at the movies this year.

Here are some of the most anticipated films of 2019:

McAvoy reprises his role as Kevin Wendell Crumb, the terror with 24 personalities from “Split,” with M. Night Shyamalan returning as director. Taking place in a mental institution for those who believe they have superhuman abilities where McAvoy, Willis, and Jackson’s characters are being kept, Paulson plays the psychologist who tries to convince them that they’re just normal people as Willis’ character Dunn uses his abilities to track down Crumb.

“The Lego Movie 2: The Second Part”

The film reunites our heroes of Bricksburg, five years after “The Lego Movie” smashed its way into the box office. Now, invaders from outer space are threatening to destroy everything, and to restore harmony to the LEGO universe, Emmet, Lucy, Batman, and their friends will have to trek to a strange galaxy where everything is a musical. The first “Lego” film was filled with stellar animation, fast-paced, smart storytelling, and nonstop gags, and we can’t wait to step back into a world that defiantly exudes optimism.

“How to Train Your Dragon: The Hidden World“

Toothless and Hiccup return to the screen, fulfilling their vision of a peaceful utopia for dragon kind — but a wrench is thrown in when the Night Fury meets a cute lady dragon appropriately called Light Fury. As the future of dragons is threatened, a star-studded cast teams up to voice the characters responsible for keeping it safe.

It seems overdue that Marvel Studios’ first female-led superhero film comes in 2019, but we’re not mad that it’s Brie Larson fronting this blockbuster. Larson’s Carol Danvers is strong and fearless (she punches an old lady in the trailer!), and it’s encouraging that the writers are making sure Captain Marvel’s femininity is “part of that strength,” rather than taking away from her powers. And with Larson’s arresting turns in “Room” and “Kong: Skull Island,” we’re confident she can kick ass and take names like the best of them.

Fans of “Get Out” — and who wasn’t — are anxiously awaiting Jordan Peele’s second entry in his series of “social thrillers.” The story revolves around a family vacationing at their beach house who must confront some unexpected — and possibly terrifying — visitors.

It’s been nearly 80 years since “Dumbo” graced the big screen, so it seems time we had a visit from our favorite baby elephant. The upcoming adventure film is inspired by the original, but updates the story with fantastical visual effects and shines a bigger spotlight on the cast of characters tasked with taking care of Dumbo, like Farrell’s one-armed war veteran and DeVito’s ringmaster.

Stephen King is en vogue again this year, with not one but two adaptations of his nightmare-inducing novels. Warm up for “IT: Chapter 2” with a whole different kind of scary: the classic story of an ill-fated family trying to escape city life by moving to a quiet house in the woods, only to find a “Pet Sematary” behind their house. They soon find out that the ancient graveyard belongs to much more malevolent forces than they could imagine.

When 14-year-old foster kid Billy Batson meets an ancient wizard at the end of a subway tunnel, he gets the power to turn into a superhero any time he wants by yelling “Shazam!” With the help of his foster brother Freddy Freeman, he learns to hone his powers in order to stop the villain Dr. Thaddeus Sivana from wreaking havoc with his own powers.

Harbour once again fulfills his role as the hero we didn’t know needed as Hellboy, a being caught between the supernatural and human worlds. This R-rated remake of the 2004 cult favorite follows the storyline of the graphic novel series by Mike Mignola. In this chapter, Hellboy battles the Blood Queen, an ancient sorceress hell-bent on revenge.

The heart-wrenching loss we suffered as our heroes (spoiler alert) turned to dust at the end of “Avengers: Infinity War” may have been for nothing, as rumors surface that many may return for the final chapter of the Avengers saga. Though the trailer showed us the remaining Avengers mourning the loss of their fallen comrades, it also confirmed the suspicion that Ant-Man somehow survived the wrath of Thanos. With new “Dr. Strange” and “Spider-Man” movies also imminent, it seems highly likely that they, and perhaps others, will be resurrected to fight the final battle against Thanos.

We never knew we needed a neo-noir Pokemon crime drama, but that was before we saw the trailer, which has racked up more than 50 million views since its release in November. Detective Pikachu (voiced by Reynolds) has to solve the mystery of his former partner’s disappearance, aided by Smith’s Tim Goodman. With “Deadpool,” Reynolds has basically cornered the reluctant-hero-with-a-dry-wit market, and this film looks to inject some of that edge into an iconic brand and resonate with aspiring Pokemon trainers of all ages.

It’s a whole new world for the Aladdin universe, with Smith reprising Robin Williams’ role of the Genie in Guy Ritchie’s live-action retelling of the 1992 film. The quest for the magic lamp continues, following Disney’s recent trend of creating live action versions of classic animated movies like with “Beauty and the Beast” and “The Jungle Book.”

“Godzilla: King of The Monsters”

The stakes are higher than ever, with the Monarch agency up against Godzilla, Mothra, Rodan, King Ghidorah, and a litany of god-sized monsters battling for supremacy. With the most ancient and ferocious species the world’s ever seen unleashed, this could be a “Godzilla” film for the ages.

It’s lonely out in space for Egerton, who stars as Elton John in a new fantasy re-imagining of the famous rock star’s rise to stardom. Interwoven with original songs written for the film, Egerton insisted on doing his own vocals, instead of using a composite-vocal mixed with John’s voice as Rami Malek did in “Bohemian Rhapsody.” The result takes us through John’s wild life, from his days as a prodigy at the Royal Academy of Music to his musical partnership with Bernie Taupin.

The sequel to Marvel’s “X-Men: Apocalypse” saga returns for a reboot, with the all-star cast from the X-Men franchise including McAvoy, Fassbender, and Lawrence. In this installment, the X-Men are forced to recon with the Phoenix, played by Turner, whose powers are triggered after a solar flare hits her during a mission to space.

Seeing as filming took place in New York, Italy, Morocco, and London, the new film will see the global operations of the secretive alien agency and have the agents romping across the globe to take down bad guys. Thompson and Hemsworth already showed that they’re a formidable pair on “Thor: Ragnarok,” so if anyone can fill the shoes of Will Smith and Tommy Lee Jones, it’s Thor and Valkyrie.

Shrouded in secrecy and plagued with troubles after John Lasseter left Disney, the film has seen its release dates moved around, gained and lost directors, and been rewritten several times. Now in the hands of Josh Cooley, the full ensemble cast of the original film will return to voice the classic characters, except for the late Don Rickles and R. Lee Ermey as Mr. Potato Head and the Army Sergeant. It’s confirmed that Randy Newman will write the music once again (it wouldn’t be the same without him), but the plot remains a mystery.

Peter Parker packs for vacation to Venice, Italy in this latest installment, with Holland returning as Spider-Man. His vacation is cut short by a visit from Nick Fury (Jackson), who recruits him for a new mission in which he is rumored to be teaming up with an unlikely ally, the villain Mysterio.

We know, we know: Nothing can top the original “Lion King,” but if you’ve caught a peek at the trailer for the upcoming remake, you’ll see just how breathtaking the film looks. Made with photorealistic computer-generated animation, every blade of grass, every gradient in the open sky is visible, and the movie promises to envelop you in a heart-soaring visual experience like no other. And with the likes of Rogen and Beyonce lending their voices to the big screen, you’ll see Pumbaa, Nala, and the various members of the Pride Lands in a different light.

“Once Upon a Time in Hollywood”

The upcoming Quentin Tarantino film is set in 1969 Hollywood during the Helter Skelter reign of terror at the hands of the Manson family. The story follows a former TV star and his stunt double who set out on a quest to make a name for themselves in the industry. With an ensemble full of Oscar winners and nominees, the star power alone is bound to draw moviegoers to the theaters.

The sequel to the first chapter of Stephen King’s famed horror story follows up the disturbing events that plagued a group of misfit kids in Derry, Maine, over one long summer, resulting in a string of unsolved murders. Twenty-seven years later, the adults versions of The Losers Club must dig deep to recapture their childhood bravery by returning to their hometown to finish off Pennywise the Dancing Clown once and for all.View image on Twitter

Enough with all these superhero movies — it’s time for a villain to take the spotlight. For the first time since the loss of Heath Ledger, the Joker returns Written and directed by Todd Phillips, prepare for a departure from the Christopher Nolan Batman universe — Phillips is best known for “The Hangover” and was also a producer on “A Star Is Born.” Though little is known about the plot, the origin story of DC’s favorite villain should shed light on how the Joker came to be.

“You Are My Friend”

The Marielle Heller-directed film stars Hanks as Mr. Rogers, but it’s not a biopic — rather it’s based on Tom Junod’s famous Esquire interview, “Can You Say…Hero?” with the children’s show star. The story goes that Junod was reluctant to profile Rogers, thinking it would be little more than a puff piece — but surprise, surprise — everyone’s favorite neighbor ended up changing his life.

Fans of “Frozen,” rejoice! Parents of young children, good luck! The 2013 animated musical film took the world by snow storm, and audiences praised the film’s gorgeous visuals, touching themes surrounding sisterhood, and of course, the catchy songs that invaded our brains and households for weeks after. With the voice actors and songwriters from the first film on board, we can’t hold our excitement back anymore.

Get your high-waisted pants ready, because Kylo Ren and the gang are back to finish the Skywalker story that began decades ago. It has been confirmed that Poe Dameron, Rey, and Finn are coming back to the Resistance, and Carrie Fisher will return in the form of footage from the past two films. Returning to the director’s chair, J.J. Abrams will pick up the last episode of the trilogy, with John Williams completing what will likely be his final Star Wars score.