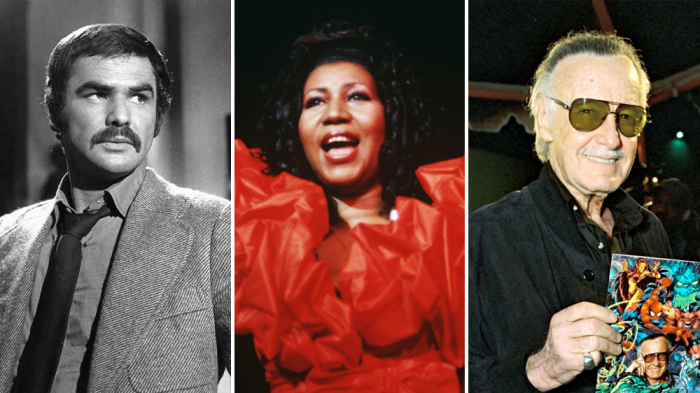 Every year, the Oscars, Emmys and Grammys must choose which notable performers and creators to memorialize in their In Memoriam segments, and the three organizations will have many talented entertainers to remember at 2019’s ceremonies.

The past year saw the loss of celebrated stars of the big screen, such “Smokey and the Bandit” star Burt Reynolds, who died Sept. 6. Reynolds, who was 82, earned an Oscar nom for “Boogie Nights” and also appeared on television in “Evening Shade.”

Among the other notable movie performers lost this year were “Superman” and “Smallville” actress Margot Kidder, who died May 13; “The Heart Is a Lonely Hunter” star Sondra Locke, who was also a film director and died Nov. 3; and Susan Anspach, who starred in “Five Easy Pieces” and “Blume in Love” and died April 2.

Several stars known for their work in the 1950s, ’60s and ’70s passed away in 2018, including Dorothy Malone, who starred in “Written on the Wind” and on TV in “Peyton Place.” She died Jan. 19. One-time teen heartthrob Tab Hunter, who starred in “Damn Yankees” and “Polyester,” died July 8, while Barbara Harris, who starred in “Nashville,” “Freaky Friday” and “Family Plot,” died Aug. 21.

A number of prominent performers on the small screen died this year. Penny Marshall, who delighted 1970s TV fans as “Laverne & Shirley’s” Laverne and who also directed feature films including “Big” and “A League of Their Own,” died Dec. 17.

Among the many notable TV series actors who died were “F-Troop” and “Mayberry R.F.D.” star Ken Berry; “Frasier’s” John Mahoney; Hugh Dane, who played Hank the Security Guard on “The Office”; “I Dream of Jeannie” star Bill Daily; “The Walking Dead” actor Scott Wilson; and Reg E. Cathey of “The Wire.”

“Glee” star Mark Salling died Jan. 30 at 35 years old. He had been facing a prison term for possessing child pornography.

TV creatives who died this year include “SpongeBob” creator Stephen Hillenburg, who died Nov. 26 of ALS at 57 years old. Craig Zadan, who produced live TV musicals such as “The Sound of Music Live” in addition to the Oscars and movies like “Chicago,” died Aug. 20. Producer Steven Bochco, the creator of “NYPD Blue,” died April 1.

The Queen of Soul, Aretha Franklin, died Aug. 16 of pancreatic cancer. Franklin won 18 Grammy Awards, was inducted in the Rock & Roll Hall of Fame and was a Recording Academy Lifetime Achievement honoree.