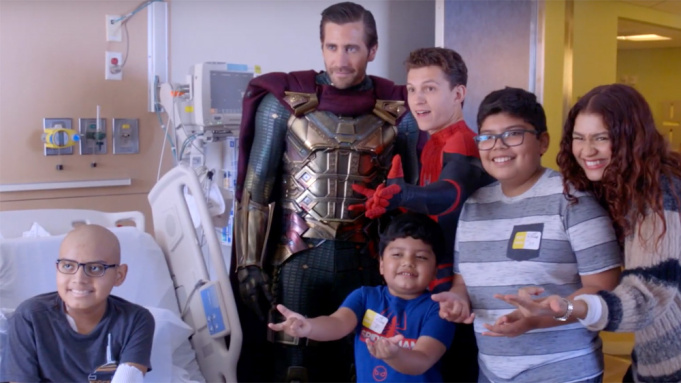 A few of Earth’s Mightiest Heroes paid a visit to the Children’s Hospital in Los Angeles.

“Spider-Man: Far From Home” stars Tom Holland, Zendaya and Jake Gyllenhaal signed autographs, took selfies and hung out with patients on Thursday. The surprise visit came after an exclusive screening of the Marvel film followed by a Q&A with the cast. In the upcoming sequel, Holland reprises his role as the titular web-slinger, Zendaya returns as Spider-Man’s crush MJ, and Gyllenhaal joins as Mysterio.

A touching video shared by the hospital shows the actors in full superhero attire to visit each patient in their hospital bed.

“We’re gonna catch Mysterio!” Gyllenhaal jokes at the beginning of the video, while Holland trails close behind with a baby in tow.

Later on, a young fan confesses his love for Holland (or at least his power-wielding character), saying, “I love you, and that you shoot webs.”

Holland playfully responded, “You like it when I shoot the webs? Well, I actually used all my webs on my way over here.”

Directed by Jon Watts, “Spider-Man: Far From Home” launches in North America on July 2. The comic-book film debuted in China, Japan and Hong Kong last weekend with a mighty $111 million.