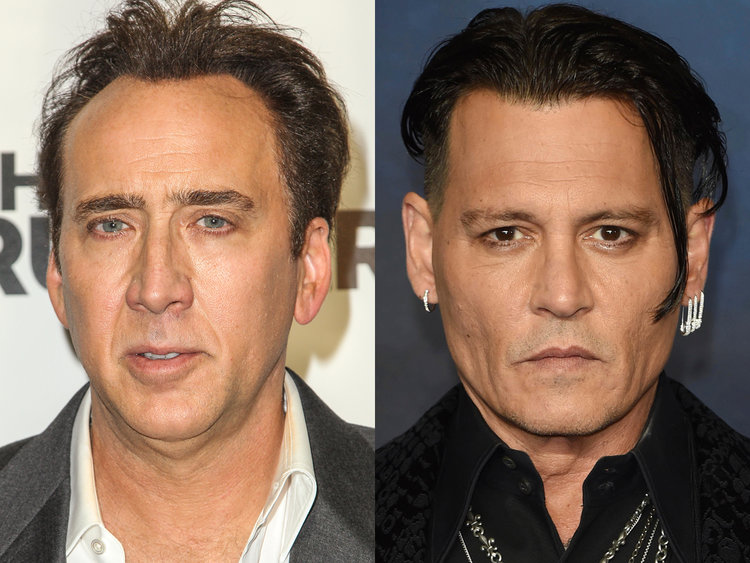 Nicolas Cage is opening up about some wild new life stories.

In a New York Times Magazine profile, the “National Treasure” actor detailed some of his crazier experiences with dangerous king cobras, his friendship with Johnny Depp and a very literal search for the Holy Grail in Rhode Island. See the biggest talking points from the conversation below.

1. Cage’s pet king cobras inspired his “Ghostrider: Spirit of Vengeance” character after they tried to kill him.

When Cage’s two pet cobras tried to attack him, they didn’t just threaten his life — they also inspired his character in “Ghostrider: Spirit of Vengeance.” As the two snakes prepared to strike, Cage says they swayed from side to side, a motion Cage adopted for Johnny Blaze who does a similar movement before attacking. But don’t worry, he’s since gotten rid of the snakes. “After I told that story on ‘Letterman’ the neighborhood wasn’t too pleased that I had cobras, so I had them re-homed in a zoo,” he said.

2. He claims that when he yelled “You talked!” in “Rage,” he was trying to create a Stockhausen effect.

Cage acknowledged the weird prolongued scream he gave in “Rage,” but claims the sentence was meant to sound off. “I was sustaining a vocal sound there, because I was trying to play with Stockhausen and mess up the EQ of my vocal,” he said.

3. He actually didn’t meet Johnny Depp during a game of Monopoly.

He clears up a long rumored story of meeting Johnny Depp over the board game — in reality, the two already knew each other. “He was at the point in his career where he was selling pens or something to get by,” Cage said. “He would take my money and buy cocktails but wouldn’t tell me about it. He admitted it later.” Instead, Cage says the duo’s Monopoly meeting was instead a chance for him to  convince Depp to get into acting, turning him into the sensation he is today. “I said, ‘Why don’t you just try acting?’ He wanted to be a musician at the time, and he told me, ‘No, I can’t act.’ I said, ‘I think you can act.’ So I sent him to meet with my agent. She sent him out on his first audition, which was ‘A Nightmare on Elm Street.’ He got the part that day,” he said.

4. He says he purchased the dinosaur skull at an auction while he was on some sort of personal “grail quest.”

Many may remember the time Nicolas Cage outbid Leonardo DiCaprio for a dinosaur skull at an auction in 2007. He claims he went through on the epic purchase during a time in his life dedicated to what he called a “grail quest.” He used mythology to search for the legendary Holy Grail, which took him to the Chalice Well in Glastonbury and Rhode Island where he later bought property. He eventually had to return the dinosaur head after realizing it was taken from Mongolia illegally. “Of course it should be awarded to its country of origin,” he explained. “But who knew? Plus, I never got my money back. So that stank.”

5. John Stamos’ L’eggs pantyhose commercial inspired one of his lines in “Peggy Sue Got Married.”

Adding to his previous admission that he never wanted to make the film, Cage went on to reveal another unexpected inspiration for his character. In a conversation discussing good vs bad acting, Cage explained that he’s interested in comedic “cringeworthy” acting that can be found in commercials. He cited a John Stamos pantyhose commercial which he says inspired one of his major lines. “In it he said, ‘I love L’eggs pantyhose!’ And the way he went ‘love’ — he expressed it with almost a rock ’n’ roll screech. I saw that commercial, and I had to put it in ‘[Peggy Sue Got Married.’” he said.  “I was playing Charlie Bodell, and I’m with Kathleen Turner, and I said: ‘I’m in love with you.’ I’ve told John about this. He took the compliment.”