Sylvester Stallone on Returning as Raambo: ‘The Warrior Can Never Find Peace’ 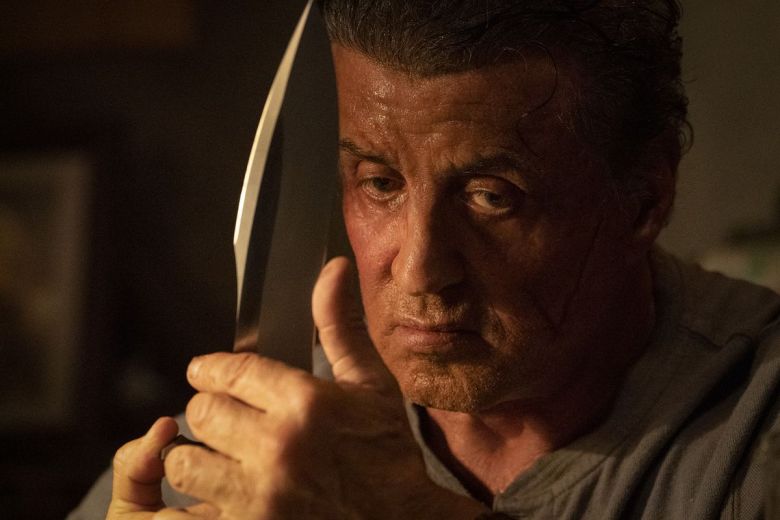 Sylvester Stallone may be 73, but he’s not one to sit back in his twilight years. As his legendary body slows, his output certainly hasn’t. This Friday, “Rambo: Last Blood” hits theaters around the world – 37 years after the debut of “Rambo: First Blood.”

Why bring the muscled Vietnam veteran back for a final, bloody curtain call? “The warrior can never find peace,” Stallone said in an interview. “He just can’t.”

But neither can he avoid the vulnerabilities, both emotional and physical, that increase with age. “He’s always getting hurt,” Stallone said, “but now he’s getting older, so he’s getting hurt even more.”

Besides the new “Rambo” film, Stallone is at work on another “Rocky” installment. He also hinted at a new project based in Asia. “I may be doing a movie in China soon. Top secret. A big one,” Stallone said. Without going into many details, he revealed that the movie would be set in Hong Kong and that his character would be “definitely an out-of-sync, two-generations-behind, definitely-wouldn’t-use-Alexa kind of guy.”

He added: “Right now, a lot of guys go over there [to China] to do action movies, but I think you could do more than that – do more suspense, more of a story,” he said. “I think I’ve found the combination. It’s more like a ‘Blade Runner,’ because when you’re dealing with the two mixed cultures at the same time….I don’t want to tip it off, but it’s f—ing cool.”

You can totally end the story with him going home, having that shot of him going down the driveway, which is completion. But a character like that — does he ever really go home? I jotted down on a Post-It: “He came home, but he never arrived,” and I went, there’s a movie here. The warrior can never find peace. He just can’t.

His entire mind has been remolded, re-sculpted, and retooled in that adrenalized, horrible alternate universe called war. It’s not PTSD, but a hunger….And I said, boy, now if we could hook him up with a motive, so that it’s not violence for violence’s sake. So he’s become an adoptive father to this Latino girl and family, and she’s the only anchor he has left, that touches his heart, because everything else he’s touched has died. And if that’s jeopardized? Well, everyone in the audience knows what he’s capable of. You don’t have to do this whole back story. You just know, like, oh s—.

What are you bringing to the role that you couldn’t as a younger man?

You’re bringing the onslaught of age, that he’s not what he was. A young fighter is at his peak reacts automatically without thought. Action, reaction. Well, you lose that as a boxer around 35, 38, 40. You start to think, and you can’t execute. Your mind says, “Go,” but the hands, they just don’t respond. So now Rambo’s in that mode. He’s not what he was, but his mind still won’t let him stop.

What do you think of the action genre today, and how it’s evolved?

These films now are scientific. They’re made by techno-wizards. They don’t have to interact with actors to the extent you used to, because the machines do the work. And that’s not to denigrate the actors. In a Marvel film, you’re not going into the subtleties. You’re dealing with a canvas so big, so huge, that it becomes to me almost like watching a fireworks show. Like, oh, wow, that was big. It’s a whole different thing.

Whereas with the earlier action films — “Dirty Harry,” even “Bronson” — it was slowed down. You actually saw this guy thinking and you could say, “You know, I’m on board with this. I know that feeling.” Whereas it’s tough to get into Thor’s head. I don’t know what it’s like to be that guy. So you’re swept away by this magnificent display of technology.

With this “Rambo” I’m looking at something much more simplified: Like man-on-man, in cave. It’s pretty simple. Really basic, no CGI.

At this advanced stage in your career, what interests you most as an actor or filmmaker? Why do you even want to do any more?

I understand that there’s a certain level of expectancy with me. If I do a film, I start to sense that the audience is going, OK, enough of the acting, let’s see some actual physical locomotion. So I’m interested in seeing how you can combine a film where the audience goes, OK, we get it, we’re on board emotionally, now let’s hit it. Don’t beat us over the head with the “O, woe is me” thing.

Steve McQueen is supposedly the father of the understatement, where, as legend has it, he cut all his lines. He goes, “Oh, I have 11 lines here? You can have ’em. I’ll just do a look.” And sure enough, that’s what made him. The less he talked, the more mysterious and action-y he became. Nobody wants a whiny hero. They just don’t. Don’t talk so much; just do it. Do it, and also, don’t be vulnerable.

Most action guys never really get their ass kicked. I mean really on the ground with somebody on them thumping away. You’d be shocked at how many guys will not get bruised up. They think it diminishes their character’s extraordinarily ability. But me, I think it enhances the character, so it’s a choice I make in every movie.

So you’re most interested in exploring how to be vulnerable and emotional as an action hero but still keep people watching?

That’s what’s worked my whole career. Rambo, he’s always getting hurt, but now he’s getting older, so he’s getting hurt even more. He knows he’s not as fast. I’m not a great fighter anymore, but I fight great fighters and get hurt. I’ve always approached it from that angle, because that way, the audience goes, “Oh, good. So he’s not the best. He can die.”

You wrote a lot of Rocky in your own image. Given everything you’ve been through since, if you were creating a new character now, who would it be?

I think it would be in the world of suspense. To me, suspense is the ultimate action; it’s the action of the brain. Take “Se7en.” You’re on the edge of your seat, you’re, like, terrified, right? You try to get that in action movies but the louder they get, the less scary they are, because it’s just bang, boom, machine guns, bullets. What’s scary is when you don’t hear the bullets, but you know he’s around the corner somewhere. So I would try to go more suspense, maybe a police kind of thing.

[I’d be] a guy who’s a little sardonic, a little pessimistic. Like how by the last Rocky, I’m nothing. That vibe — it’s very real, when he’s thinking, “I’m really not even close to what I used to be. I’m a shadow of myself.” When you get to be 50 years old, you’re like, “F—, man, where’d it all go. I was so good before. Where’s time gone? God, I blew it. You should’ve seen me when.” I’d want to tap into that [last Rocky] character, but keep going.