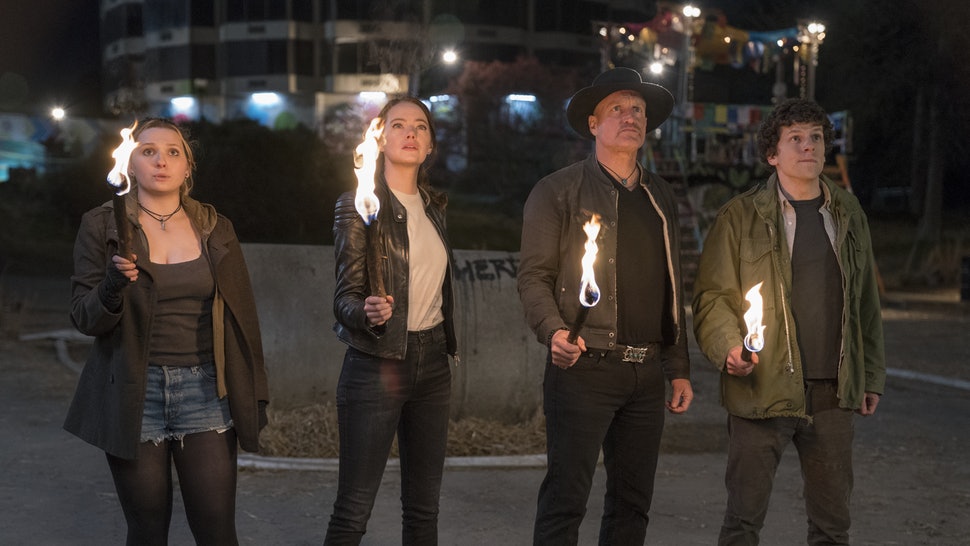 Despite inevitable comparisons to Glenn Close’s iconic turn as Cruella de Vil in 1996’s “101 Dalmatians,” Emma Stone teased that her take on the infamous villain in the upcoming “Cruella” movie will be very distinctive.

“It comes long before her story,” Stone told Variety at the premiere of “Zombieland: Double Tap” at the Regency Village Theater in Westwood, Calif., on Thursday night. “It’s a different ball game.”

Many fans were stunned upon being given a first look at Stone’s punk-rock inspired interpretation of the character when Disney released an image from the upcoming prequel during this past summer’s D23 Expo.

“Well, I saw myself in the mirror getting ready, so I wasn’t that shocked,” Stone said of the first look. “It’s been really fun. We are in the middle of it right now so it’s still sort of hard to even talk about it. It’s been really, really cool.”

The long-awaited sequel “Zombieland: Double Tap” sees Stone reunited with her fellow zombie apocalypse survivors Abigail Breslin, Jesse Eisenberg and Woody Harrelson after ten years. The intervening decade had brought about many changes and achievements for the cast, including a best actress Oscar for Stone, but she remarked that it felt almost like no time had passed.

“It’s so much fun to be with all of these people again,” Stone said. “It’s such a joy and such a blast. It just felt like old times again, but everybody’s had all these great life experiences and there was so much more to share. It was really special.”

Breslin, who was 13 years old when she starred in the first movie, told Variety that some cast members had trouble recognizing her post-puberty.

“Woody thought I was, like, a stalker when he first saw me,” Breslin said. “He didn’t know who I was. I was like, ‘Hi, Woody’ and he was like, ‘Uh, hi?’ I was like, ‘It’s Abby.’ He was like, ‘Oh, right!’ And same with Jesse a little bit. Emma remembered me though. They were all pretty shocked.”

Eisenberg told Variety that he hadn’t truly realized the lasting impact that the original “Zombieland” movie had on fans and on the zombie genre as a whole until the cast began their publicity tour for the sequel.

“It’s kind of surreal,” Eisenberg said. “It felt like this kind of very private thing when we were filming the movie and then I kind of realized it has this pop culture resonance and that people feel like it’s theirs as well as ours.”

The sequel also saw the introduction of new actors and characters to the original surviving foursome, including Zoey Deutch, Rosario Dawson, Avan Jogia, Luke Wilson and Thomas Middleditch. Dawson made her first premiere appearance with boyfriend and Democratic presidential candidate Cory Booker. The couple seemed relaxed as they cozied up for the cameras and Dawson laughed at the attention paid to Booker. “Hey, it’s my premiere!” Dawson exclaimed as Booker obliged a nearby crowd of autograph seekers.

A fan of the original movie, Deutch told Variety that she had trouble believing that the atmosphere on set was as enjoyable as it had appeared on-screen.

“I was happy to find out that my first instinct was correct,” Deutch told Variety. “It was the most fun I’ve ever had on set. It was such a life-affirming experience because these are my heroes, some of my favorite actors in the world and they were kind and so generous and so welcoming.”

Writers Rhett Reese and Paul Wernick, who returned to pen the sequel, said they were thrilled that the original “Zombieland” was at the forefront of the zombie genre’s resurgence over the past decade.

“When I ran into Robert Kirkman from ‘Walking Dead,’ he said that the reason ‘Walking Dead’ made it on air was because of ‘Zombieland,’” Wernick told Variety. “It was their opportunity. People felt like, wow, zombies can actually be commercial and make money, so AMC rolled the dice. It was awesome to hear that.”

Though the sequel was ten years in the making, director Ruben Fleischer said he isn’t ruling out a third installment.

“That would be beyond a dream come true,” Fleischer said. “I hope that in due time we will be able to make another one but only if the circumstances are right.”