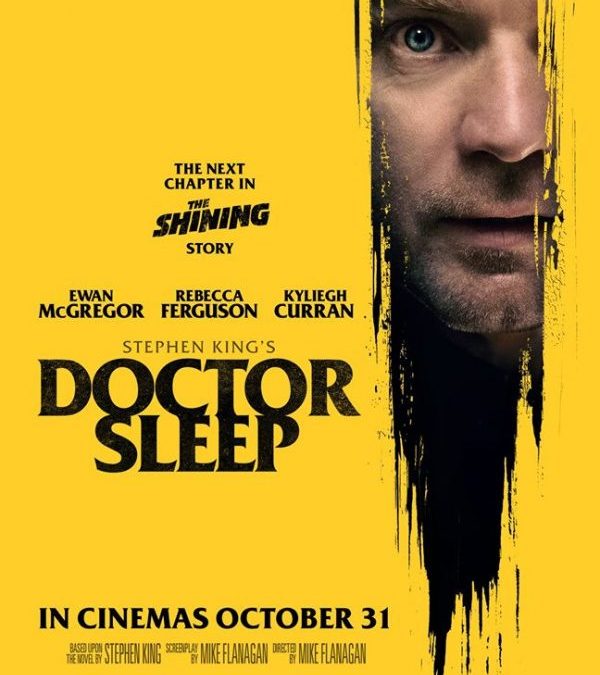 On the face of it, making a sequel to “The Shining” does not sound like a promising idea. Stephen King’s original novel, which was published in 1977, remains one of his greatest (it’s not a tale that needs to be messed with). And in the 40 years since Stanley Kubrick’s spooky cerebral film version of “The Shining” came out, the movie has come to define the look and mystique of this story in our culture. Nearly every aspect of Kubrick’s visualization of the Overlook Hotel and its live-in demons — the corridors with their ’70s-suburban-acid-trip orange-and-brown hexagon carpeting, the Diane Arbus twins in their teal party dresses, the Hawaiian Punch blood splashing out of the Navajo Deco elevators, the lobby with its adobe walls and high-ceilinged wagon-wheel chandeliers, the somnambulant British caretaker talking in the bathroom in hypnotic dream time, the rotting-old-lady specter emerging from behind the shower curtain of Room 237 ­— is as iconic as anything that exists in contemporary screen horror.Even a good serious film, like “Before Sunrise” or “The Hustler,” can beg for a sequel. But when you try to do a sequel to a film as iconic as “The Shining,” the result tends to come out like “The Two Jakes” or “The Godfather Part III” or “Psycho II”: a pale, forgettable, entirely superfluous imitation of the original. Then again, if anyone has the right to craft a sequel to “The Shining,” it’s Stephen King. He did it six years ago, in his 531-page novel “Doctor Sleep,” and the movie that has now been made of it combines that book, which follows the saga of Danny Torrance as an adult, with a deviously exacting replication of the mood and setting of Kubrick’s “The Shining.”King is on record as having been dissatisfied with Kubrick’s film (I get why, since I think King’s novel is superior to the movie version), but “The Shining,” as a film, is now thought of as a classic. It’s there, like a ghostly monument. And so the new movie, written and directed by Mike Flanagan, is at once an adaptation of King’s sequel and a theme-park horror lark that treats the Overlook as a nightmare playground we now get to revisit.

That the movie works at all says something about how irresistible it is to go back there. That it works as well as it does is a testament to the ominous pull of Stephen King’s imagination. I still don’t know if “The Shining” needed a second act, but “Doctor Sleep” presents one that’s fresh and unsettling enough to justify its existence. The film runs on for an unnecessarily extended 151 minutes, and that’s undoubtedly a by-product of the success of “It,” the lengthy 2017 adaptation of the first half of King’s killer-clown novel. But in this case the contrast only serves to heighten how “Doctor Sleep,” unlike the whack-a-demon “It” films, at least uses its length to sink into a mood of genuine contemplative dread.

Decades after “The Shining,” Danny, now known as Dan, and played with a reflective sadness by Ewan McGregor, has grown up into the kind of reckless middle-aged party derelict who falls into drunken barroom fights. One night, he picks up a cokehead and wakes up next to her dead body, only to learn that she’s a mother with a small child. The terror of that realization spins him toward a moment of truth, and he winds up at a New Hampshire rooming house, going to AA meetings led by Dr. John (Bruce Greenwood).

The year is 2011, and it doesn’t take higher math to see how Dan wound up as an angry drunk: So was his father. (Of course, his dad also turned into a psycho who tried to murder his wife and son, which might have left a self-medication-breeding scar or two.) Dan is carrying demons of the personal kind — but, of course, he’s also still shining, picking up disparate voices as if his head were a radio receiver, though he tries to keep the voices compartmentalized in “lockboxes,” the way Dick Hallorann (Carl Lumbly) taught him to. Dan gets a job as an orderly at a hospice clinic, where he uses his psychic abilities to help ease patients into the beyond (hence his nickname, Doctor Sleep). And in his rented attic room, where one entire wall is a blackboard, he starts to see mysterious messages scrawled in chalk, at which point the audience realizes that you can take the boy out of the Overlook…

But all this, frankly, is the set-up that you’d expect from a ho-hum, let’s-cash-in sequel to “The Shining.” Part of the power of Jack Torrance as a character, in the original novel, is that his alcoholic rage expressed something deep and mysterious: that as a father he no longer felt he had the right to display anger in a domestic setting. (He was grappling with the same new world that T.S. Garp was.) “Doctor Sleep,” by contrast, presents Dan going through the standard addiction-is-a-disease earnestness of 12-step drama.

Yet the movie also has a wild card, in the form of a treacherous life-or-death cult ruled over by someone named Rose the Hat. She’s played by Rebecca Ferguson, who was so radiant as the opera diva in “The Greatest Showman,” and when Rose shows up in the opening moments of “Doctor Sleep,” tempting a little girl with flowers, the film strikes a note of mesmerizing creepiness. What’s Rose doing with this girl? Our minds drift to unspeakable scenarios, and we aren’t wrong: Rose leads a gang of semi-immortal ruffians known as the True Knot, who sustain their lives by inhaling “steam,” a kind of psychic essence that’s produced when children who have the shining die, preferably in pain (the more pain, the more steam); the steam is then stored in thermos canisters. That’s flat-out horrifying, but after sitting through so many fright-films-of-the-week that bamboozle rather than terrify, I found myself lured into a movie that dares to depict evil as something that makes us suck in our breath.

What adds to the creepiness is that Rose herself is a diabolically seductive figure. Ferguson, in her magician’s hat and hippie jewelry, plays her like a satanic member of the Rolling Thunder Revue — a ’70s free spirit who thinks it’s her right to live as long as she wants to, whatever it takes. In essence, she’s leading a cult of vampires who are feeding off child murder. Yet she does it with a smile. Ferguson makes Rose at once imperial and sensual, an outlaw high on her mythology. The first hook of “Doctor Sleep” is that it’s a movie built around a she-devil with star quality.

The second hook is that it’s about kids who shine each other’s agonies around the world, like Abra, a girl in Dan’s New Hampshire town with shining abilities unlike anything he has ever seen. In “Doctor Sleep,” shining isn’t just about hearing and knowing things — it’s about a kind of psychic teleportation. Abra, whose last name is not Cadabra (it’s Stone), is played by 13-year-old newcomer Kyliegh Curran with a mix of trepidation and cunning that echoes Danny Lloyd’s performance in “The Shining.” Abra and Dan are drawn together, as Dan, realizing that there’s more at stake than his recovery, wakes up to the gift he’s been repressing.

“Doctor Sleep” is a prosaic movie, but one that earns its shock waves of emotion. It isn’t until the final third that the story settles back into the Overlook Hotel (though there’s a quickie sort of prologue set there), and by the time we get to the fabled lodge, perched in the snowy Colorado Rockies, it’s more than a stunt; we feel as if the story has earned the right to go back. Every third horror film these days is set in a haunted house, but the Overlook remains uniquely alive with its lavishly coordinated demons. You might say they’re old friends (hello, bath lady! hello, split-down-the-head party guest!), but they’ve got a handful of tricks left. Naturally, there’s a scene in which Dan sits at the glowing ballroom bar, tempted to take a drink, and though the performer who plays the bartender does fine, here’s one case where I wish the film had relied on computer technology to conjure up the image of a certain fabled actor. That said, the climax is eerie and satisfying. This sequel to “The Shining” may register, in the end, as a long footnote, but it makes you glad that you got to play in that sinister funhouse again.