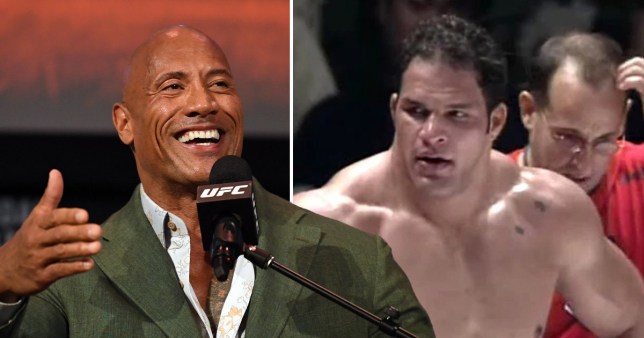 Dwayne “The Rock” Johnson has found his next role to add to his extremely busy slate. The pro-wrestler-turned-Hollywood-multi-hyphenate will star as MMA fighter and UFC champ Mark Kerr.

The project marks Johnson’s first true dramatic role in his career, which has been full of successful comedies, family fare and action flicks.

Johnson will produce through his production company, Seven Bucks Productions with Dany Garcia and Hiram Garcia, and frequent collaborator Beau Flynn. The project is in early development, and no studio is attached yet.

The announcement was made Friday evening at Madison Square Garden in New York where Johnson held a surprise press conference to discuss the role. Johnson was at MSG for UFC 244 where he was the guest presenter for the main even of Nate Diaz vs. Jorge Masvidal where he will wrap the “BMF” title around the waist of the winner.

Kerr — known as The Smashing Machine, The Titan and The Specimen — is a two-time UFC heavyweight champ, and was widely regarded as the best fighter in the world during his MMA career. He was the subject of a 2002 documentary, “The Smashing Machine,” but his life story has never been reflected in a scripted film. The documentary, which aired on HBO, chronicled his life and career, including his romantic relationships, friendships and addiction to painkillers.

“Mark Kerr’s story is such an incredible story,” Johnson said, addressing his fans at Madison Square Garden, after he made the surprise announcement Friday night that he’d be portraying Kerr on film. “Like all of us, and like a lot of these fighters, he battled these demons — these demons of addiction, these demons of mental health, these demons of getting out and the pressure of fighting in front of 50,000 people and what that does to somebody. Here’s a guy who has gone through it all, hit rock bottom, but the best part about Mark Kerr is that, like all of us in this room and all these fighters, these warriors, is that everyday, we get up and we want to do a little bit better tomorrow than we did today.”

Johnson said he had spoken to Kerr earlier in the day to let him know that he’d be making the announcement to the MMA fans on Friday night at the UFC weigh-in at Madison Square Garden, and Kerr was thankful that Johnson wants to tell his story. “He’s overwhelmed that this is happening, and I love that he trusts me with his life and with his story,” Johnson shared.

“The guy was a beast and he was dominant and there was only one like him at that time,” Johnson continued. “When you think about these fighters, there is no other sport like MMA — the multiple disciplines and the pressure and the fact that you put your life on the line, literally, every time you step in the cage — and if you dig a little deeper than the physicality that they have, there’s a real character of depth to a lot of these warriors, and Mark is one of them.”

Seven Bucks Productions was behind Johnson’s “Fast & Furious” spinoff “Hobbs & Shaw,” as well as “Jumanji” Welcome to the Jungle,” “Rampage” and “San Andreas,” NBC competition series “The Titan Games,” which has been renewed for a second season, and HBO series “Ballers,” which will wrap after its fifth season. The company is also producing Johnson’s upcoming Disney family film, “Jungle Cruise,” Netflix’s big budget “Red Notice” and the “Jumanji” sequel, which hits theaters this December. Johnson and Seven Bucks also have projects set up at Disney Plus and Quibi.