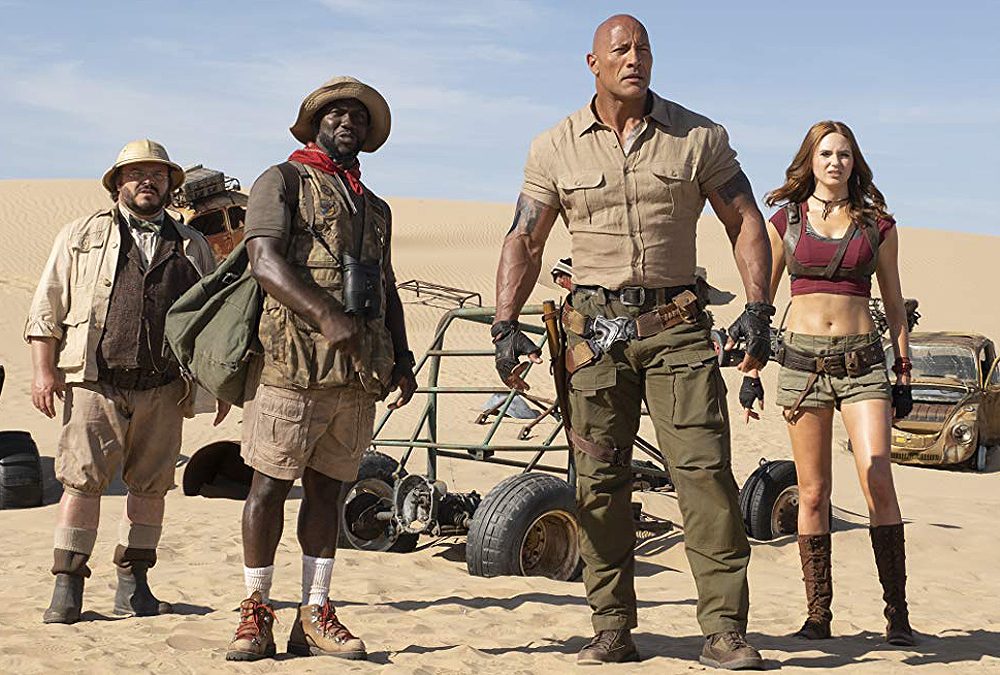 It’s shaping up to be a merry holiday season for “Jumanji: The Next Level.” Sony’s adventure sequel debuted in first place to $60.1 million, dethroning “Frozen” after three consecutive weeks as box office champ.

Those ticket sales, arriving at the higher end of industry projections, represent a healthy jump on the $36 million start of its predecessor, 2017’s “Jumanji: Welcome to the Jungle.” It also marks the highest debut for a December comedy, as well as the best launch for live-action movie for stars Kevin Hart and Jack Black.

Overseas, “Jumanji 2” kicked off with $85 million for a global start of $145 million. The movie opened in a few foreign territories last weekend, bringing receipts to $152 million at the international box office and $213 million worldwide.

Directed by Jake Kasdan, “Jumanji: The Next Level” was embraced by audiences, who awarded it with an A- CinemaScore. The follow-up — also starring Dwayne Johnson, Nick Jonas and Karen Gillan — follows the group of friends who return to the fantastical, and even more dangerous, world of Jumanji.

It’s a decidedly less jovial time for fellow new movies, Warner Bros. “Richard Jewell” and Universal’s “Black Christmas.” Heading into the weekend, both films were expected to earn at least $10 million. Instead, the pair didn’t even hit that number combined. On the plus side, December releases don’t typically have huge openings (“Star Wars” movies not included) but can have long legs in theaters throughout the holiday season.

“Richard Jewell,” the latest offering from director Clint Eastwood, tumbled out of the gate in fourth place with $5 million from 2,502 theaters. Those uninspired receipts rank among the worst in recent history for Eastwood and adds to Warner Bros.’ rocky box office fortunes after “Doctor Sleep,” “The Good Liar” and “Motherless Brooklyn” stumbled in recent weeks. “Richard Jewell” is the studio’s eighth movie in 2019 to debut to less than $10 million.

Starring Paul Walter Hauser, Sam Rockwell, Kathy Bates, Jon Hamm and Olivia Wilde, the biographical drama is based on the security guard falsely accused by the media for playing a part in the 1996 Olympics bombing. “Richard Jewell” has been making headlines of its own after it found itself in the center of controversy over its portrayal of a female journalist trading sex for scoops.

“Black Christmas,” a slasher film that opened on Friday the 13th, launched at No. 5 and collected $4.4 million from 2,625 screens. Despite the soft start, “Black Christmas” carries a $5 million price tag, meaning it doesn’t need huge numbers to achieve profitability. That’s good news, considering its D+ CinemaScore from moviegoers might not bode well for word-of-mouth. Females drove opening weekend ticket sales, while over 50% of crowds were 25 years and older.

“It seems like a soft weekend overall. Perhaps people are busy in school,” said Jim Orr, Universal’s president of domestic distribution. “With the nature of this time of year, even with a modest opening, we might get better than normal legs and have a decent run over the holidays.”

Disney’s “Frozen 2” slid to second place, generating a solid $19.2 million in its fourth weekend of release. The animated sequel crossed the $1 billion mark globally, the sixth Disney movie to do so this year. In North America, “Frozen 2” has made $366 million and stands as the 11th-biggest animated film ever.

In third place, Lionsgate’s murder mystery “Knives Out” brought in another $9.25 million for a domestic tally of $78.9 million. The whodunit — directed by Rian Johnson and starring Daniel Craig, Jamie Lee Curtis and Chris Evans — has generated $83 million overseas and a strong $162 million worldwide.

Among specialty releases, the Safdie brothers’ “Uncut Gems” set a new record for A24, earning $525,498 from five theaters. That averages out to $105,100 per location, making it the biggest opening ever for the studio. The high-intensity thriller has earned critical acclaim, especially for Adam Sandler’s performance as a New York jeweler dealing with repercussions from a high-stakes bet.

Another awards hopeful, Lionsgate’s “Bombshell,” kicked off in limited release. The drama, based on female Fox News anchors who went public with sexual harassment allegations against Roger Ailes, ignited with $312,000 from four screens, translating to $78,000 from each venue. Women represented nearly 60% of ticket buyers, while 86% of audiences were over the age of 25.

Terrence Malick’s “A Hidden Life” debuted to $52,000 from five theaters in New York and Los Angeles, averaging a soft $10,400 per theater. Fox Searchlight, the studio behind the film, will expand the film to 47 new markets next weekend. “A Hidden Life” is based on the true story of an Austrian farmer who refuses to fight for the Nazis during World War II.

Overall, the domestic box office is behind last year by over 5%, according to Comscore. Disney’s “Star Wars: The Rise of Skywalker” arrives in theaters next weekend. Can Leia, Rey and crew help end the year on a high note?