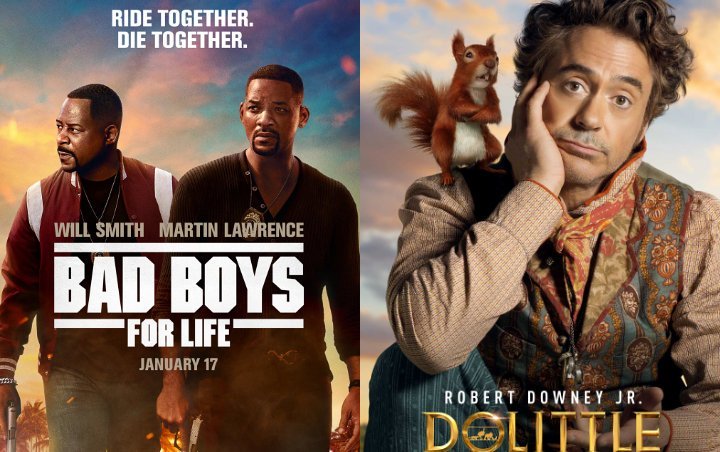 Universal’s “Dolittle” and “1917” found out what “Bad Boys” will do when they come for you at the box office. Sony’s “Bad Boys for Life,” the third entry in the Will Smith and Martin Lawrence-led series, beat expectations and towered over the competition during the Martin Luther King Jr. weekend.

“Bad Boys for Life” debuted above Sunday’s estimates, ultimately earning $62.1 million over the weekend and $73.4 million through Monday. Heading into the extended holiday frame, the “Bad Boys” threequel was expected to debut to $38 million to $45 million. But solid word of mouth from both audiences and critics (it landed an “A” CinemaScore from moviegoers and a 76% on Rotten Tomatoes) boosted ticket sales and justified Sony’s decision to revive a 25-year-old franchise. “Bad Boys for Life” now holds the second-biggest opening ever for a January release (behind “American Sniper” with $107 million), as well as Sony’s best start for an R-rated movie.

Box office experts attest “Bad Boys for Life” succeeded where oh so many attempts to reboot decades-old properties (see: “Men in Black” and “Charlie’s Angels”) failed thanks to the chemistry between Lawrence and Smith. Smith also produced the film, directed by Adil El Arbi and Bilall Fallah.

“These two stars in their iconic and beloved roles is as irresistible in 2020 as it was in 1995, when the first ‘Bad Boys’ was unleashed upon the world,” said Paul Dergarabedian, a senior media analyst with Comscore. “By injecting a bit of fun, it was like summer in January at the multiplex, and who could resist that?”

The film collected $37.3 million overseas and will surpass $100 million worldwide after the extended weekend. “Bad Boys for Life” cost $90 million. A fourth installment is already in the works.

One movie that’s likely not getting a sequel? “Dolittle,” a kid-friendly fantasy adventure that’s been plagued with production headaches and torched by critics. The studio had hoped star Robert Downey Jr.’s take on the vet who can talk to his four-legged patients could ignite a new franchise for family crowds. However, that’s looking increasingly unlikely after the movie got off to a disappointing start, launching at No. 3 with $21.9 million. It’s projected to make $29.5 million over the four-day weekend.

Those ticket sales are cause for concern since extensive reshoots pushed production costs near $180 million. “Dolittle” kicked off at the international box office to $17 million, putting global receipts at $50 million, but the film will need long legs in theaters to avoid winding up in the red.

For Downey, the weak box office performance is a stark reminder — in a post-“Avengers” world — of just how difficult launching a new franchise can be.

Universal anticipates “Dolittle” will be void of major competition on the family front until Paramount’s “Sonic the Hedgehog” opens in February, something that could prove beneficial if ticket buyers are not dissuaded by poor reviews.

“There’s not much for family audiences until Presidents’ Day weekend, so we’ve got a great runway,” said Jim Orr, Universal’s president of domestic distribution.

“Dolittle” was supposed to open last May, though it was delayed twice due to problems behind the camera. Timing in that respect proved unfortunate, given Universal just endured a big-budget flop with “Cats.” But it’s not all bad news for the studio. After nabbing a handful of Oscar nominations and taking home the PGA Awards’ top prize, “1917” scored another $22.1 million in its second weekend of wide release. After final numbers were tallied on Monday, “1917” surprisingly pulled ahead of “Dolittle” on box office charts. The World War I drama, from director Sam Mendes, should land $26.8 million through MLK Day, which would put domestic ticket sales above $80 million.

“We’re still extraordinarily enthusiastic about ‘1917’ and its prospects,” adds Orr. “Audiences continue to absolutely adore it.”

“Parasite” also enjoyed a boost after Oscar nominations, bringing in $1.7 million over the weekend and an expected $2.1 million for the four days after upping its theater count to 843 venues. Bong Joon Ho’s darkly comedic thriller has generated $28 million at the domestic box office, an especially strong showing for a foreign-language film.

After nabbing six Academy Award nods, including one for best picture, “Jojo Rabbit” also expanded its theatrical footprint and should bring in $1.8 million from 1,005 screens through Monday. The political satire, in which writer-director Taika Waititi portrays a fictional Hitler, has made $23.8 million to date.

Sony’s “Jumanji: The Next Level” and Disney’s “Star Wars: The Rise of Skywalker” rounded out the top five. After six weeks in theaters, the Dwayne Johnson and Kevin Hart-led “Jumanji” sequel pulled in $9.5 million for a domestic total of $270 million. The tentpole hit a notable milestone at the global box office, crossing $710 million. Meanwhile, “Rise of Skywalker” added $8.4 million in its fifth weekend, bringing its tally to $492 million in the U.S. Though significantly trailing its trilogy predecessors, the film impressively became Disney’s seventh 2019 release to hit $1 billion.

Industry watchers already feel optimistic about 2020. Through the first three weeks of the year, overall box office figures are up almost 12% from 2019, according to Comscore. That trend could continue when “Birds of Prey” arrives on the big screen in February.

Check out how these movies fared over the weekend here…