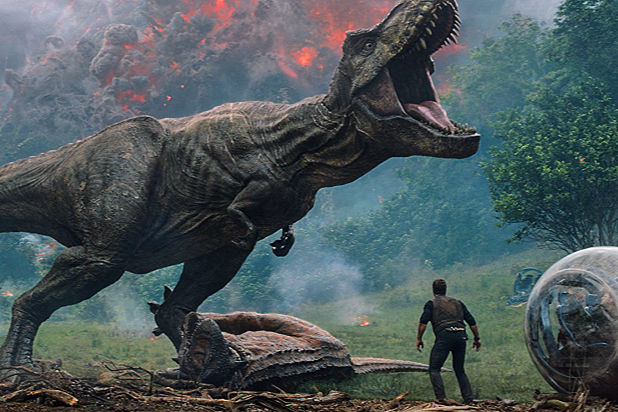 Director Colin Trevorrow announced via Twitter on Tuesday that “Jurassic World 3” has started principal production, and he also slyly revealed that the sixth film in the “Jurassic” franchise has a new title: “Jurassic World: Dominion.”

The new title — which appears on the slate for the film in Trevorrow’s tweet — evokes the biblical passage about God giving humanity dominion over the earth, a nod to the fact that “Dominion” is expected to depict the aftermath from 2018’s “Jurassic World: Fallen Kingdom,” when dinosaurs escaped captivity and into the rest of the world.

Trevorrow is returning to the director’s chair for “Dominion” after J.A. Bayona helmed “Fallen Kingdom.” He also wrote the script with Emily Carmichael (“Pacific Rim: Uprising”) from a story by Derek Connolly. Trevorrow is exec producing with Steven Spielberg, with Frank Marshall and Pat Crowley producing.

Chris Pratt and Bryce Dallas Howard are returning to the pic, and Laura Dern, Jeff Goldblum and Sam Neill are reprising their roles from 1993’s original “Jurassic Park.”

“Jurassic World” earned $1.7 billion worldwide in 2015, while the sequel grossed $1.3 billion on a reported $170 million budget in 2018. The franchise itself has hauled more than $5 billion globally.